Home / Places / Travel / Top 10 Once in a Lifetime Experiences

Top 10 Once in a Lifetime Experiences

Okay, some of the suggestions listed here on TopYaps can kill your bank, but what the heck, you can’t take your bank while leaving this world. The world functions on thrill, exhilaration and passion; if you’ve got the courage to look behind the curtain. And when you’ve got the courage, try to live in quest of completing these objectives that only a fistful of other folks have done in their lifespan.

Oktoberfest is possibly the most famous beer festival in the world.  The festival is the world’s largest fair, with over 6 million visitors attracted to the beer tents every year. But it is more than just large quantities of Bavarian Beer, lederhosen and beer halls.

Whilst Munich offers the famous steins (the drinking tankards) and German sausages, the true enjoyment factor comes from the generous German hospitality. Sitting amongst the locals you can chat and sing along to traditional German songs, all performed by Oompha Bands who perform to a crowd of thousands of happy drinkers, who in return cheer them on.

For other great stag party ideas then why not check out Red Seven? With destinations on offer around the world you can ensure an unforgettable stag weekend that really embraces foreign cultures.

The Fringe Festival has had a history of finding the comedians of the future. Many of the current British stars have emerged through the festival which has a knack for discovering and promoting fresh talent.

Edinburgh is a city with a great atmosphere which is further enhanced during the festival. During this time the city is rife with street acts and performers. It is an energetic place that is guaranteed to excite.

As for the Scottish people, they are friendly and hearty, and have an affinity for good humor and alcohol, two of the main themes of the festival. Whilst in Edinburgh embrace the culture and try their national dish of Haggis, Neeps and Tatties (Sheep’s offal, parsnips and potatoes).

The Rio Carnival has become synonymous with Brazil. Our perception of Brazilians seem to stem from this energetic, free-spirited parade. The colourful event is celebrated all over the country but Rio’s remains the biggest and most spectacular.

With the famous parades displaying a spectacular array of shapes and colors, the beat and energy of this event naturally encourages anyone who attends to throw themselves full-heartedly into the spirit of the Carnival. Recently voted the happiest city, it is easy to see why the people of Rio de Janeiro hold the most vibrant and famous of carnivals.

Possibly the best place to see in the New Year, the world famous fireworks display from the Sydney Harbour Bridge is now an iconic view just as much as the opera house that sits opposite.

The energetic personalities of the Australians, coupled with a great setting and climate, ensure you have the best New Year party possible. The crowds on the shore give the evening a electrifying atmosphere, however if you want to get a different perspective consider spending the evening on the water, with boats to hire or cruises to indulge in you can have a truly memorable occasion and get away from the crowded shoreline. 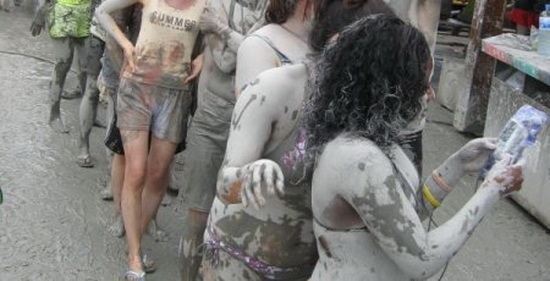 The Mud Festival in Boryeong, on Daecheon Beach, is an event which allows the most mature person to embrace their inner child. Rebelling against the famous maternal saying, “don’t get your clothes dirty”, this festival encourages smearing mud all over yourself.

You can equally justify your submersion into this culture of mud through the participants claim that the mud contains important minerals which reduce wrinkles and remove excess oils. Also, as any of you spa regulars will know, mud baths enhance blood circulation and encourage fresh skin growth.

Needless to say the modern day festival doesn’t revolve so much around well-being. There are competitive events including mud body painting, mud beauty contests and mud sculptures, though I imagine that all entrants into the sculpture event would resemble something from ‘Close Encounters of the Third Kind’.

Haad Rin Beach is located in Koh Phangan, and has earned its reputation as the hot spot for hedonistic nightlife in Thailand, due to the fact that a party is held every time there’s a full moon. It is rumored that the Full Moon Party tradition started with a local throwing a farewell party for his Australian friend.

It proved to be such a popular concept that it now attracts anything from 8,000 to 30,000 party-goers every month. This is hardly surprising due to the white sandy beach setting, alcohol by the bucket and an amicable, bohemian attitude shared by all.

The Chinese New Year is a lively affair where millions fill the streets to celebrate peace and happiness. It generally starts with a banquet which includes significant dishes, for instance prawns represents liveliness and happiness, whilst traditionally red clothing is also worn as this is intended to warn off any evil spirits.

In Hong Kong a spectacular fireworks display lights up the evening sky, and for New Years Day there are floats and traditional performers complimented by music and dragon dancers. Victoria Harbor, with its world-famous skyline, lends itself to the ideal backdrop for experiencing this oriental event which is steeped in heritage and a must-see!

8. The Festival of Light in Amritsar, Punjab, India

The Festival of Light, Diwali to the indigenous people, marks the commencement of the New Year for Hindus. This five day festival celebrates good over evil, light over dark. Each day of the festival brings its own meaning. The third day is where the ‘Festival of Light’ title has emerged as lamps and candles are lit, and fireworks are set off. Traditionally gifts are exchanged between the nearest and dearest.

Diwali is a celebratory event which demonstrates the warm and considerate nature of an entire culture. Amritsar, where the Golden Temple is located, is a great place to witness the third day of Diwali. The Temple is a site to behold on its own, although is enhanced to a phenomenal spectacle during the Festival of Light where you can experience a foreign culture at its best.

The Burning Man is an annual event which places emphasis on community, creativity and self-reliance. The community turn up and create ‘Black Rock City’ which lasts for one week, after that the ‘citizens’ are proud to depart without a trace.

The community welcome all newcomers with open arms. Their ethos believes that the more active the participant is the more they will gain from the event.

This is a surreal phenomenon which sees the birth of a city and community, in a peculiar location, only to be returned to its original form just seven days later. This festival is all about the experience and to truly benefit from it you must throw yourself wholeheartedly into it.

10. The Running of the Bulls in Pamplona, Spain

Known to the locals as The Festival of San Fermin, due to the location. This internationally recognised event has grown massively since its believed origins back in the 13th century, and now attracts tens of thousands who wish to run with the bulls.

The running of the bulls allegedly originated from men using fear and excitement to hurry the process of taking cattle to market, although this quickly turned into a competition amongst them. Nowadays though the event is a lot more organised and isn’t just limited to farmers, in fact thousands now run through a barricaded course being chased by a thundering herd of bulls!