Home / Food / Top 12 Most Unusual Food Around The World

Top 12 Most Unusual Food Around The World

The lifestyles of the rich and famous have always been fascinating to those of us who don’t have the funds to spend on ridiculously over-priced items. Every culture has its own food specialties that are rather unusual to others. For those who can afford it, this time we’ll have a look at the most unusual foods in the world. 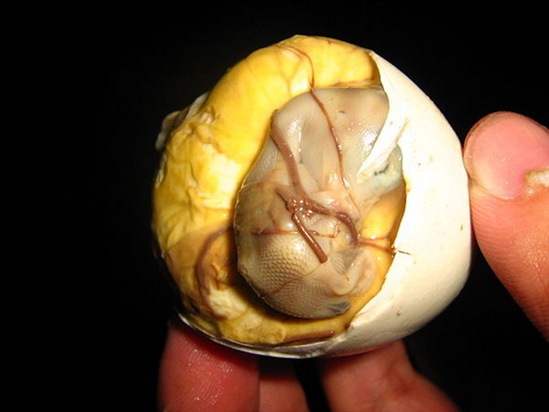 A bit like with a Kinder Surprise, you certainly will be surprised to open these eggs, though not in the same pleasant way as finding a toy inside. You get to eat your chicken and your egg at the same time with Balut. In Filipino culture Balut is almost as popular as the hot dog in America. Fertilized eggs are boiled just before they’re due to hatch, so your yolk oozes out followed by… a chicken (or duck) foetus. They are cooked when the foetus is anywhere from 17 days to 21 days depending on your preference, although when the egg is older the foetus begins to have a beak, claws, bones and feathers. 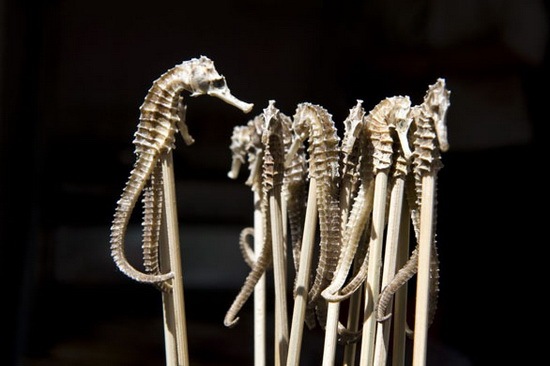 This had to be first. Somehow it was too cute to be offensive. I bite. What a relief. It tastes like pork crackling, good pork crackling, swathed in spice mixture. Probably the only one I'd actually eat again. 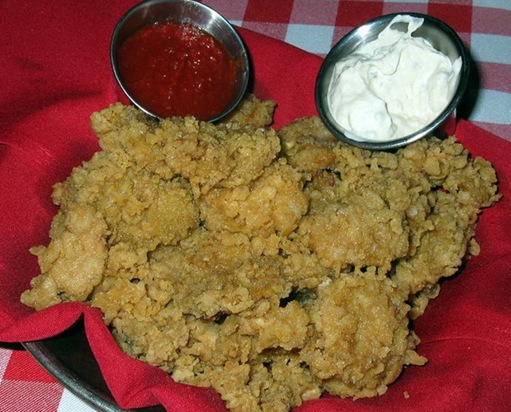 Not a country to be left out of a list, America has its own odd food, the Rocky Mountain Oyster. To the laymen, this might sound like wonderful seafood found in the Rocky Mountains. The reality is that these are bull testicals that are served up in areas where cattle is raised. Many people consider them a delicacy and cook them by peeling the sac off, pounding them flat then deep frying them. Rocky Mountain oysters also go by other names such as calf fries or bulls eggs. These ‘oysters’ are typically not sold fresh due to the work involved in harvesting them. However, they can be found in the freezer section in some American West towns and are often served during festivals in those parts of the country. 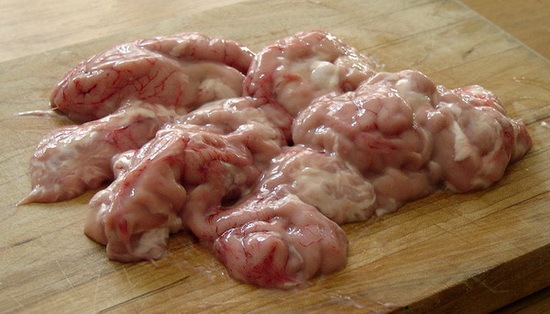 Another American oddity that is right up there in terms of unusual food with many other countries around the world. Traditionally served in the south, pig brains can be found in some older grocery stores. The brains are canned in milk gravy and shown being served over a bed of scrambled eggs. The dish is not something many people discuss if they do indulge in it and it isn’t something you’d serve your guests, unless they are your relatives and they asked for them. 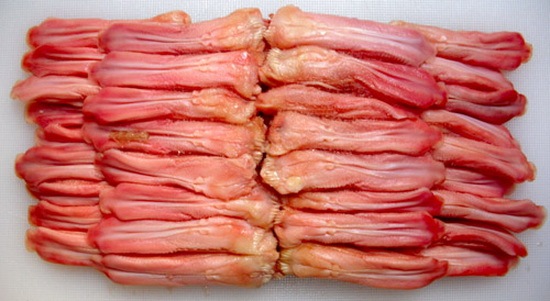 With so many other wonderful parts of the duck to eat it is hard to fathom why anyone would choose to eat a duck tongue. But, they do. This Chinese dish has even started showing up in restaurants in New York City. Some people like the taste to that of cod liver oil. Other people say that duck tongues are so good you can’t eat just one. Duck tongue is prepared by allowing it to marinate then quickly frying in oil. In China they are typically served with soy sauce and rice wine along with white pepper and a hint of sugar. 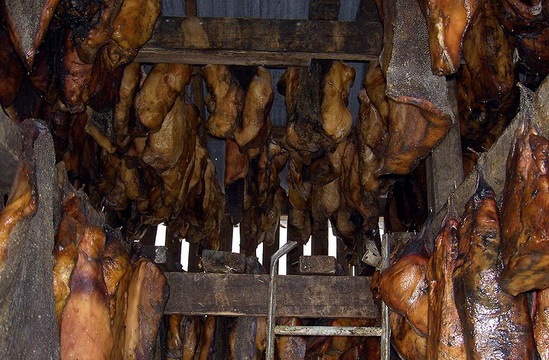 In some instances shark meat is a wonderful seafood meal to be enjoyed over a glass of white wine. In other instances it is a smelly dish found in Iceland that one should not consider unless copious amounts of wine have been consumed prior to the hakarl. Hakarl is shark meat that that is cured for five months or longer. It comes from the basking shark which is poisonous if not cured before eating. The resulting cured shark has an extremely high ammonia content which tends to make people gag until they acquire the taste for it. Hakarl can be chewy or soft, depending on which part of the shark it came from. 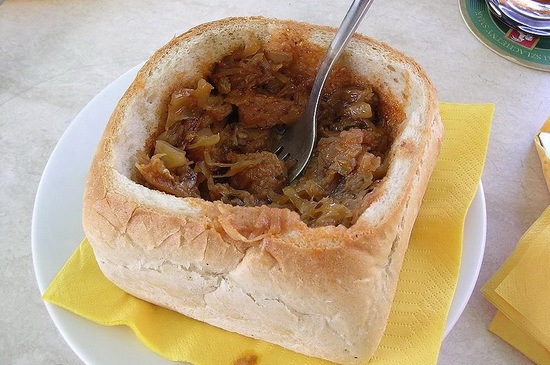 Bigos (Hunter’s Stew), is a traditional meat stew typical of Polish, Lithuanian and Belarusian cuisines. There is no single recipe for a savory stew of cabbage and meat, as recipes vary considerably from region to region, as well as from family to family. Typical ingredients include white cabbage, sauerkraut (kapusta kiszona in Polish), various cuts of meat and sausages, often whole or puréed tomatoes, honey and mushrooms. The meats may include pork (often smoked), ham, bacon, beef, veal, sausage, and, as bigos is considered a real hunters’ stew, venison or other game; leftover cuts find their way into the pot as well. 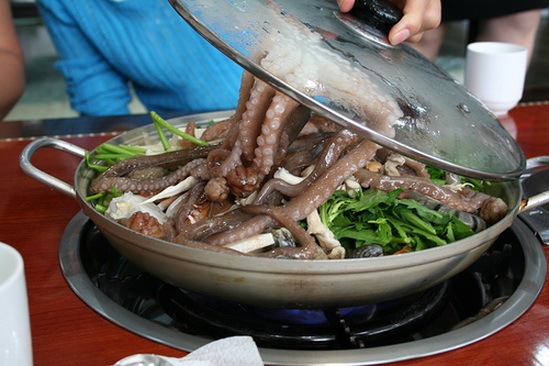 In Korea Sannakji is a raw dish consisting of live octopus. The octopus is cut into pieces whilst still alive, lightly seasoned with sesame oil and served immediately whilst the tentacles can still be seen squirming on the plate.

Eating live octopus is a challenge not only mentally trying to get your head round eating something that’s still alive, but physically, as the tentacles stick to any surface they touch. You actually have to fight with your food before you can devour it and savour its taste. 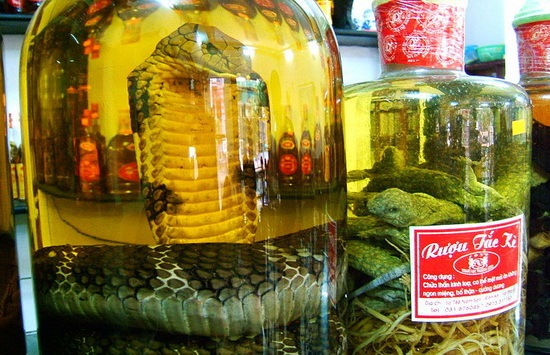 A bouquet of snake with some snake blood notes perhaps? Snake wine is a bottle of rice wine with a venomous snake inside and has ‘medicinal purposes’, but is probably more useful for display purposes than to drink.

The snake is left to steep in the rice wine for many months to let the poison dissolve in the wine. The ethanol makes the venom inactive so it is not dangerous, and snake wine supposedly has many health benefits. It has a slightly pink colour like a nice rose because of the snake blood in there. 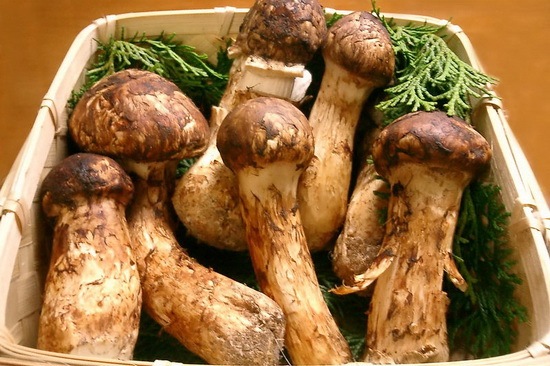 Matsutake is the common name for a highly sought after mycorrhizal mushroom that grows in Asia, Europe, and North America. It is an important element of Japanese cuisine. Matsutake are hard to harvest and therefore the price is very high. The Japanese matsutake at the beginning of the season, which is the highest grade, can go up to $2,000 per kilogram. In contrast, the average value for imported matsutake is about $90 per kilogram. 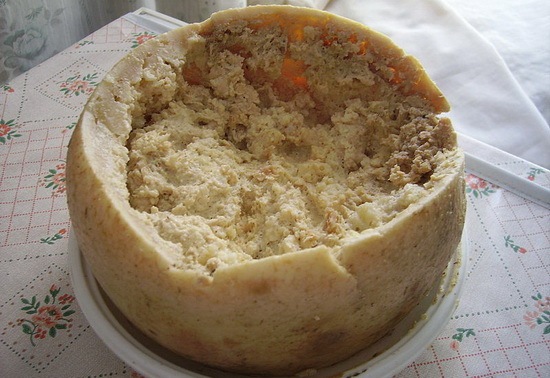 Casu marzu  is a traditional Sardinian sheep milk cheese, notable for being riddled with live insect larvae. It is found mainly in Sardinia, Italy.

Derived from Pecorino, casu marzu goes beyond typical fermentation to a stage most would consider decomposition, brought about by the digestive action of the larvae of the cheese fly Piophila casei. These larvae are deliberately introduced to the cheese, promoting an advanced level of fermentation and breaking down of the cheese's fats. The texture of the cheese becomes very soft, with some liquid (called lagrima, from the Sardinian for "tears") seeping out. The larvae themselves appear as translucent white worms, about 8 millimetres (0.3 in) long. When disturbed, the larvae can launch themselves for distances up to 15 centimetres (6 in). Some people clear the larvae from the cheese before consuming; others do not. 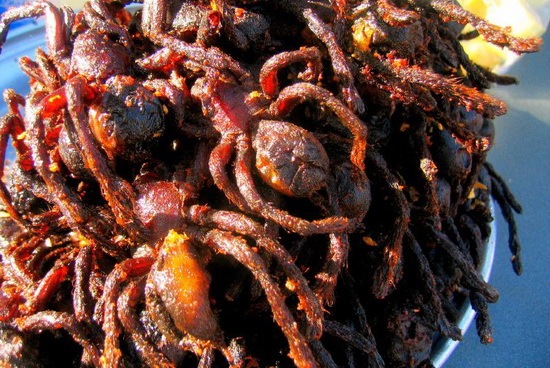 Fried spider is a regional delicacy in Cambodia. In the Cambodian town of Skuon, the vending of fried spiders as a specialty snack is a popular attraction for tourists passing through this town. Spiders are also available elsewhere in Cambodia — in Phnom Penh for instance — but Skuon, a market town on the highway 75 kilometres (47 mi) from the capital, is the centre of their popularity. The spiders are bred in holes in the ground in villages north of Skuon, or foraged for in nearby forestland, and fried in oil. It is not clear how this practice started, but some have suggested that the population might have started eating spiders out of desperation during the years of Khmer Rouge rule, when food was in short supply.