12 Most Fascinating Fountains on Earth

Fountains are one of the most creative constructions man has ever done and are basically a creatively designed flow of water which comes from some source, bursts like a shower and then passing through various cascades and gorgeous basins of metals stones and marbles, gets drained. To make fountains further beautiful, colorful lights are added to way of the fountains from where the water showers. Fountains are an exclusive way of enhancing tourism also. Although Fountains are found in almost every city of the world but The top twelve Fountains presented here are the most beautiful and tremendous ones. 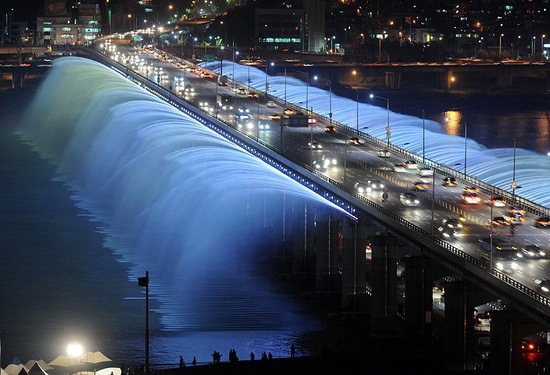 The Banpo Bridge  is a major bridge in downtown Seoul over the Han River, South Korea, connecting the Seocho and Yongsan districts. Banpo Bridge is on top of Jamsu Bridge, forming a "double deck" bridge. When the water level rises too high, the Jamsu Bridge becomes covered with water and gets closed off. The lower deck incorporates pedestrian and bicycle paths that provide easy access to the Banpo Hangang Park from the north side of the river. Banpo Bridge is a girder bridge and was completed in 1982. Peterhof is a luxurious mansion and beautiful Empire, founded in 1710 by Peter the Great on the banks of the Gulf of Finland (Baltic Sea). Combining several palaces, a number of garden landscapes and a collection of statues and fountains, giving him the title “Russian Versailles him.” Grand Cascade flows from beneath the palace towards the Baltic Sea and is one of the circuits of the world’s largest fountain. From the Grand Cascade’s largest fountain, filled with the golden statue of Samson fighting a lion, a canal flowing through the park to the pier, where the hydrofoil and ship from St. Petersburg harbor. 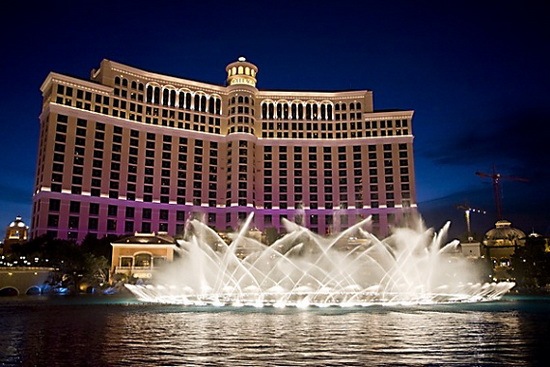 One of the most popular free attractions in Vegas is the Fountain show of the Bellagio Hotel and Casino. A perfect compilation of lights, music and water make this quarter mile long lake a place to surely visit while in Vegas. With each show lasting around 5-10 minutes, 1200 nozzles, 4500 lights, a variety of music and water shooting 240 feet in the air its a perfect show for any age. Listen to a variety of Broadway tunes, classical music, and opera while falling in love with the dazzling water show in front of you. Be sure to go on a calm night because the shows are canceled for high winds. 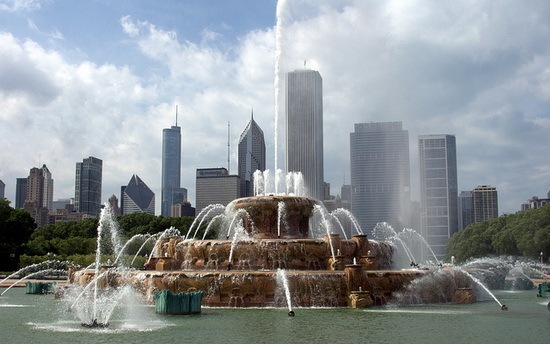 Buckingham Fountain is a Chicago landmark in the center of Grant Park. Dedicated in 1927, it is one of the largest fountains in the world. Built in a rococo wedding cake style and inspired by the Latona Fountain at the Palace of Versailles, it is meant to allegorically represent Lake Michigan. It operates from April to October, with regular water shows and evening color-light shows. During the winter, the fountain is decorated with festival lights. 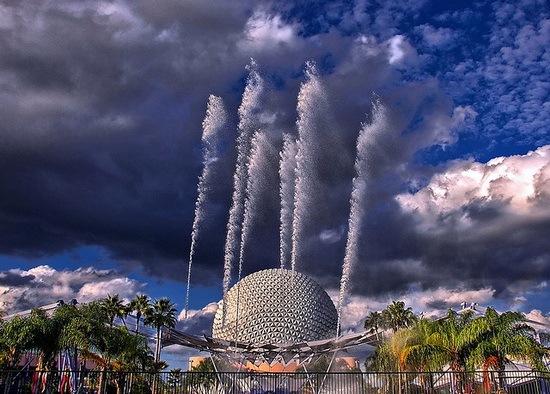 The Fountain of Nations is a musical fountain in the Epcot theme park, designed by Mark Fuller and his team from WET. The fountain contains about 200,000 gallons of water, has about 300 nozzles and can shoot water between 30 and 150 PSI to over 150 feet high.

The original fountain was built in 1982 with the rest of the park. In the dedication ceremony, representatives from 22 nations poured water from their countries into the fountain. In 1993, the fountain was refurbished to perform water shows synchronized to a handful of pieces of music. At night, the fountain illuminates with 1,068 different colored lights. During Epcot's Holidays Around the World celebration, the fountain dances to Christmas music. It is also synchronized with The Lights of Winter archway that is over the bridge connecting Future World and World Showcase. 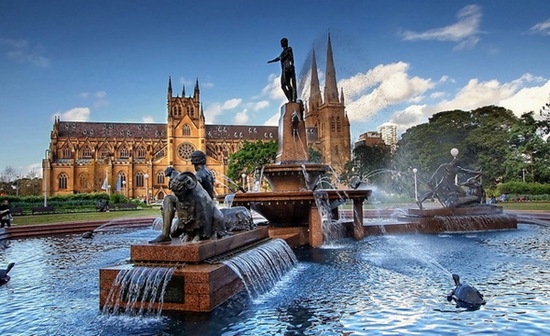 The Archibald Fountain, properly called the J.F. Archibald Memorial Fountain, widely regarded as the finest public fountain in Australia, is located in Hyde Park, in central Sydney, New South Wales. It is named after J.F. Archibald, owner and editor of The Bulletin magazine, who bequeathed funds to have it built. Archibald specified that it must be designed by a French artist, both because of his great love of French culture and to commemorate the association of Australia and France in World War I. He imagined its civic design and ornamentation developing to rival his dream city Paris. The artist chosen was Francois Sicard. 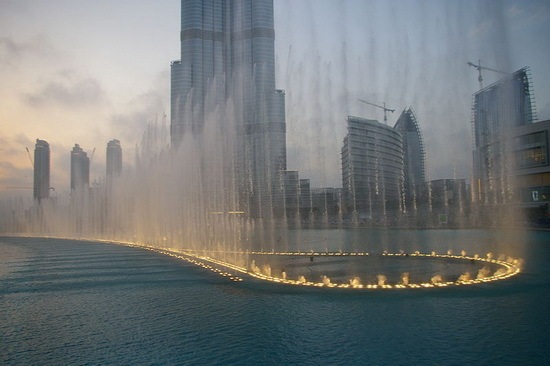 The Burj Kalifa Fountain in Burj Dubai, UAE is among the largest and most technologically advanced fountains in the world. The $218 million fountain was unveiled in May of 2009. While it’s similar to the famed Bellagio Fountain in Las Vegas, it’s 25% bigger and boasts water sprays as high as a 50-story building. But even more impressive than the facts and figures is the sheer beauty of the lighted water show. It’s nothing short of breathtaking. 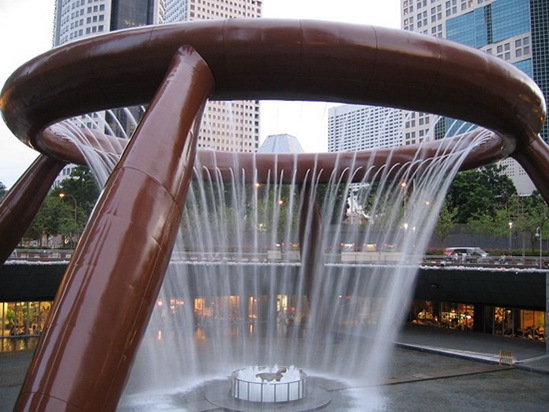 This gigantic fountain is the central feature of Suntec City mall in Singapore. The fountain stands at over 45 feet (13.8 meters) and is said to bring good fortune and wealth to those who walk around it three times while constantly touching the water. It was recorded in the 1998 Guinness Book of World Records as the world’s largest fountain. 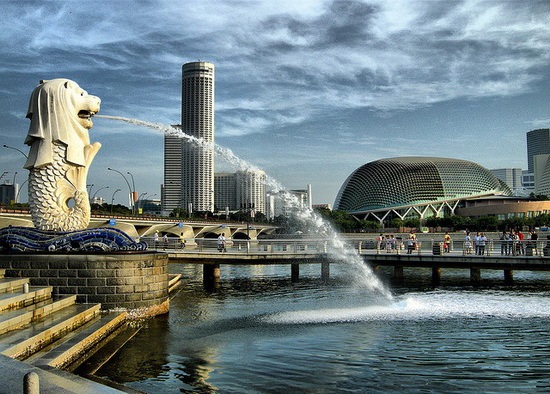 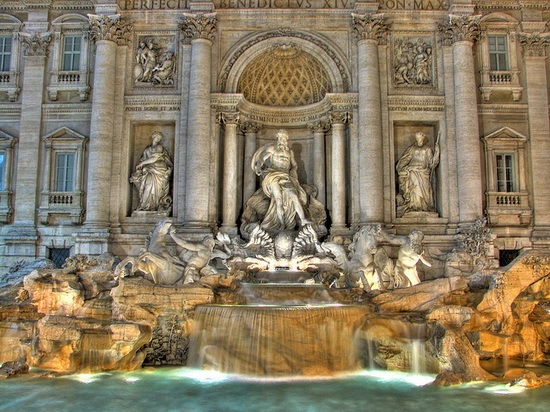 The Trevi Fountain is at the ending part of the Aqua Virgo, an aqueduct constructed in 19 BC. It brings water all the way from the Salone Springs (approx 20km from Rome) and supplies the fountains in the historic center of Rome with water. In 1732, Pope Clement XII commissioned Nicola Salvi to create a large fountain at the Trevi Square. A previous undertaking to build the fountain after a design by Bernini was halted a century earlier after the death of Pope Urban VIII. Salvi based his theatrical masterpiece on this design. Construction of the monumental baroque fountain was finally completed in 1762. 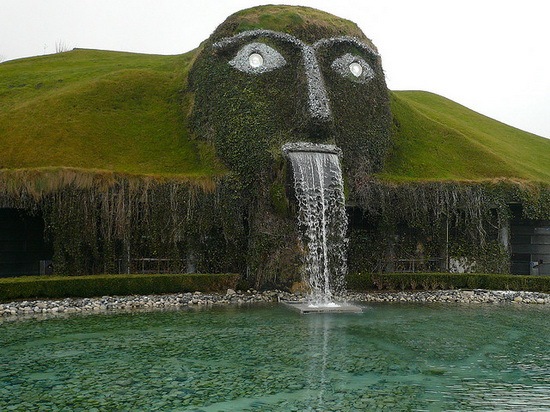 The Swarovski Kristallwelten, or Swarovski Crystal World, sits in the Austrian Tyrol like a jewel in a ring. If it looks like a fortress, that’s no accident: In 1892, firm owner Daniel Swarovski shifted the entire company out of Bohemia (today’s Czech Republic) to the wild & woolly Tyrol so that the tools and methods of the secretive company would remain firmly under wraps. 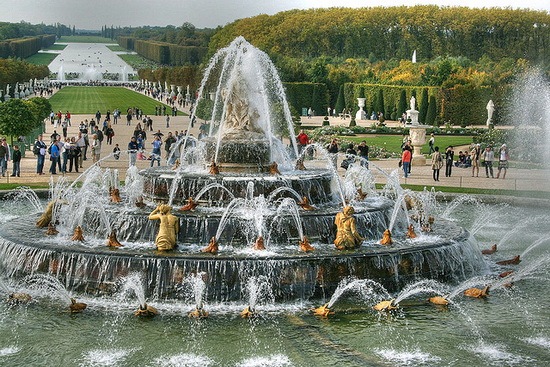 Versailles is the most famous garden in the world. Yet 'garden' is scarcely a fitting designation. The scale is monumental and there is little sense of enclosure. Versailles was designed as a palatial centre of government for an absolute monarch, Louis XIV. It is resplendent as the prime example of the French Baroque style, but it is not a friendly place. 'Overbearing' is a common description and English critics have often been disenchanted with the place.