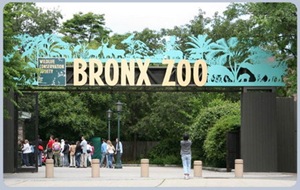 If you like monkeying around, there's a place that's calling your name. The zoo lets you get up close and personal with your favorite animals and expand your knowledge about nature's greatest spectacle. Instead of going back to your local zoo again and again, why not see what else the world has to offer? Here are 10 amazing zoos every animal lover should see:

The Phoenix Zoo is a bundle of fun for the whole family, especially since it has been voted one of the top five best zoos for kids! This 125-acre park is home to more than 1,200 animals and offers several world-class exhibits you'll adore. Dunk your hand into the stingray bay touch tank, or get a workout in while biking around the zoo to see your favorite animals.

Forget Bourbon Street – go party with the animals at New Orleans' famous Audubon Zoo. This wonderful park is home to gorillas, orangutans, leopards, two brother white tigers, a Komodo dragon and a wide variety of snakes. Get in touch with your inner Cajun at the Louisiana Swap exhibit that houses big white alligators. And stop by the Audubon's Cool Zoo, a splash park that will cool down the kiddos on those hot summer days.

Animal lovers will be blown away by the incredibly popular Columbus Zoo in Columbus, Ohio. This spectacular park is directed by famous zookeeper Jack Hanna, and is full of world-class exhibits, featuring more than 7,000 animals. Come see the park favorites: the African lion, gorillas, Asian elephants and the Arctic foxes.

Get your fix at the Bronx Zoo in New York City, which is home to more than 600 species, including the ever-popular Siberian tigers, gorillas, crocodiles, bears and the rare snow leopard. The 265-acre park has the largest man-made rainforest in the world that's filled with world-class exhibits and attractions, such as the Congo gorilla forest, butterfly garden and Madagascar. Be sure to check out the exciting daily feeding and enrichment demonstrations.

Treat yourself to a stroll around the beautiful Zoo Praha, located in Prague, Czech Republic. This 111-acre park is home to more than 4,600 animals from 630 species. Here you can partake in some unique activities you won't find at most zoos, such as attending a camel's baptism, or watching bears eat vegetable and fish ice cream. And for a mere 5 Euros, this visit is oh-so-affordable.

Take a walk on the wild side at Singapore Zoo, a 70-acre rainforest-inspired facility that uses hidden barriers to create an open and natural environment with streams, moats and lush vegetation. In addition to the pure beauty of the facility, Singapore Zoo is also home to more than 2,500 animals from 316 species, including white tigers, orangutans, polar bears and Asian elephants, as well as several endangered species like the Komodo dragon, Malayan tiger and white rhino.

Animal Kingdom in Orlando, Florida, is a must-see zoo for the animal-loving family. Animal Kingdom is one of the four theme parks at Walk Disney World Resort, and is home to more than 1,700 animals from 250 species that can be viewed in rafts or safari-style vehicles. This wildlife theme park is a 500-acre oasis complete with waterfalls, lush vegetation, rivers and scenic walkways. Don't forget to enjoy the awesome roller coasters and water rides.

Set your sights on the breathtaking San Diego Zoo, a 100-acre facility that features more than 4,000 animals from 800 species. San Diego is one of only a few zoos that houses the giant panda. Visitors will enjoy the lush landscapes and scenic walkways that adorn this gorgeous park, as well as the exciting "cageless" exhibits that feature several endangered and threatened species.

The Smithsonian National Zoological Park, popularly known as the National Zoo in Washington, DC, is a magnificent park with more than 2,000 animals from 400 species, many of which are endangered or threatened. Come see the wattled cranes, Sumatran tigers, sloth bears and the rare giant pandas. The zoo is accessible by the DC metro system and admission is always free!

Take a trip to Vienna, Austria, to the Tiergarten Schonnbrunn Zoo, the world's oldest zoo. This beautiful and oh-so-popular park is home to more than 500 animal species, including the beloved giant panda and her cuddly cub, jaguars, Siberian tigers, koalas and many more. Enjoy world-class exhibits and attractions amid this modern and architecturally chic facility.