This is a list of the world’s most tragic accidents in history. Bear in mind that the items here are not sorted by death toll. Ultimately, these devastating moments in history affected the world and changed how we see and deal with our lives. Note that this list does not include events that were caused by deliberate violence or natural disasters. 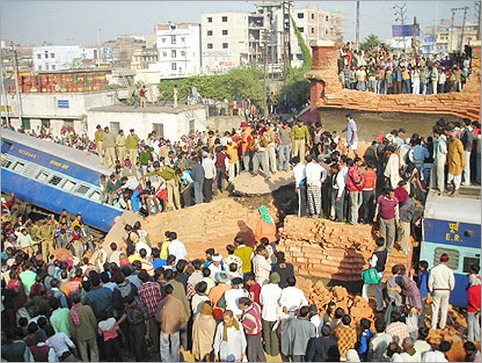 June 6, 1981 is an unforgettable day for the people of Bihar, India. On this day, a passenger train carrying more than 500 passengers and travelling between Saharsa and Mansi derailed and plunged into the Bagmati river. It is considered India’s most tragic railway disaster. The real cause of the accident is still uncertain but many believe that it was one of the three: a cyclone, flash flooding and, believe it or not, brake failure while avoiding to hit a water buffalo. Yes, a kalabaw.

Many people believe that the worst train tragedy in recorded history is the “Queen of the Sea” disaster in Sri Lanka. But since it was caused by a tsunami, which is a force of nature, it is intentionally excluded from the list.

Traveling by plane is often considered the safest. The death toll caused by plane crashes has barely reached 14,000 in the last century. Still, others argue that if we compare the ratio of air accidents to the total number of flights, the figures are still disturbing.

The Tenerife collision is the worst plane accident since plane was invented. March 27, 1977: two Boeing 747 airliners (Pan American World Airways Flight 1763 and KLM Royal Dutch Airlines Flight 4805) collided at Los Rodeos on the island of Tenerife, killing 583 people. KLM 4805 was taking off on the airport’s only runway when it crashed into Pan Am 1736, taxiing on the same runway. A massive explosion happened, followed by a huge ball of fire. The sound was heard throughout the island.

8. THE SINKING OF THE USS INDIANAPOLIS 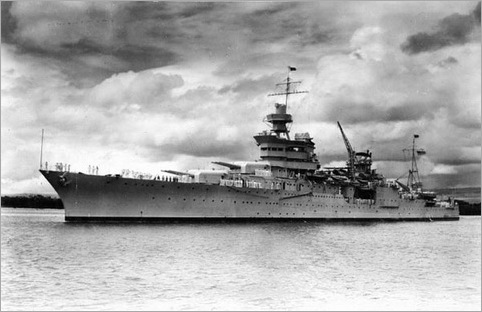 A few weeks before the end of World War II, the USS Indianapolis, a US Navy Portland-class heavy cruiser carrying 1196 men, was en route to Leyte in the Philippines from Guam. They never made it to the Philippines. The cruiser sank completely 12 minutes after a torpedo from a Japanese submarine hit it.

You might be thinking that this should not be included in this list because war is definitely an act of deliberate violence; however, it is not the sinking per se. Only around 300 people were trapped on it. A total of 896 men were able to leave the ship. In fact, they were able to call for rescue a number of times but it was denied because it was thought to be sent by a Japanese submarine setting them up for a trap.

The poor sailors stayed floating in the middle of the ocean for more than four days. Without any food and water, some were tempted to drink seawater which sentenced them to dehydration. Many perished because of this.

What was more terrifying was that it was shark-infested. For four days, they were floating in the open sea and every three to four hours, sharks would attack and prey on them. For four days, they were waiting to be rescued while silk sharks, blue sharks and oceanic whitetip sharks in groups of 120 to 150 would have a feast. Of the 896 who survived the sinking of the ship, only 317 were alive when they were finally rescued.

Although sharks played a significant part in this incredibly traumatic tragedy, it wouldn’t have happened had they not ignored the distress calls. It still boils down to human error, making it one of the most tragic accidents in Naval history.

7. THE BATTLE OF RAMREE 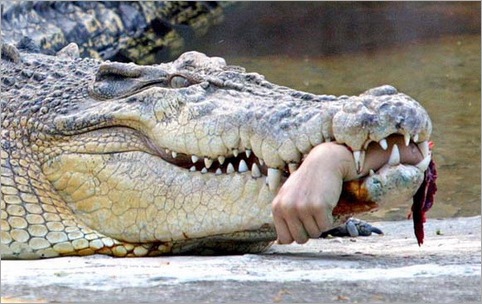 If a shark attack doesn’t give you the creeps, this one will. Another unbelievably disastrous event in the military history is the Battle of Ramree Island in Burma.

On February 19, 1945, while retreating from the Royal Navy, around 900 soldiers of the Imperial Japanese Army crossed through miles of mangrove swamps. According to Bruce Wright, one of the Royal Navy members who trapped the Japanese, of this number, only 20 were alive and captured.

What happened to the rest of the troop?

It is believed that they were attacked and eaten by saltwater crocodiles inhabiting the area. This claim is disputed but the Guinness Book of World Records lists this event under the title “Greatest Disaster Suffered from Animals” nonetheless. 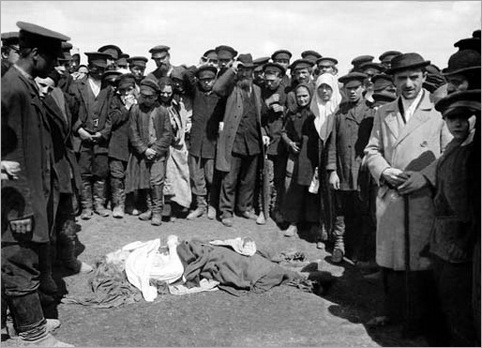 On May 18, 1896, a mass panic occurred on Khodynka Field in Moscow, Russia during the festivities following the coronation of Nicholas II, the last Russian emperor.

Four days after Nicholas II was crowned Tsar of Russia, a banquet was to be held for the people. There had been rumours that the tsar would be giving away rich coronation gifts. On the eve of the celebration, people started to gather on the field in anticipation.

Suddenly, a rumour that there would not be enough presents for everybody spread. A stampede took place. Several thousands of people were caught in a catastrophic crush leaving 1,389 trampled to death and about 1,300 injured.

You might be very curious about the supposedly expensive gifts. It turned out that the gifts were a bread roll, gingerbread, a piece of sausage and a mug. 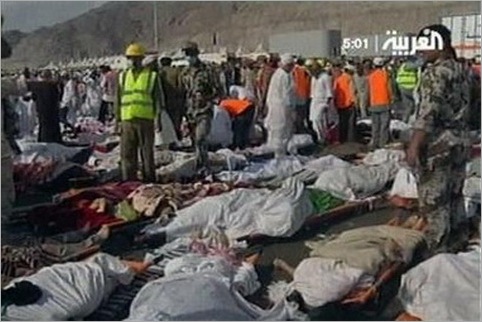 Another remarkable stampede is the 1990 Hajj tragedy in Mecca, Saudi Arabia. The annual sacred Muslim Hajj is attended by millions of pilgrims. Sometimes, even when authorities think they have done everything to avoid stampedes and other disasters, things still go wrong and deadly. Stampedes in Mecca are not unusual. Hundreds of pilgrims are killed in a mad rush of the crowd especially during the Stoning of the Devil ceremony. But the most tragic documented peace-time stampede in history occurred at the 1990 Hajj when more than 1400 pilgrims died in a pedestrian tunnel. 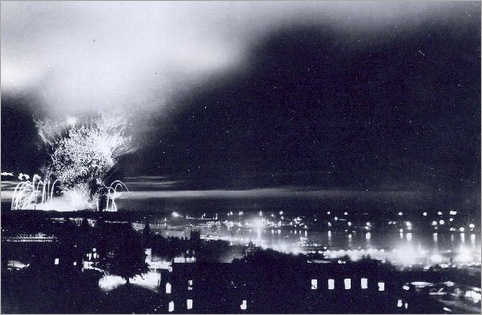 On December 6, 1917, the people of Halifax in Canada were shocked to hear the sound of an explosion. Others did not have enough time to be shocked because they were blown away literally by the blast. The city was devastated when Mont Blanc, a French cargo ship which was loaded with wartime explosives, accidentally collided with the Norwegian ship Imo in “The Narrows” section of the city harbour.

The initial blast left almost 2000 people dead, usually by fires, debris and collapsed buildings. Later deaths pushed the number up to over 2000 while more than 9000 people were injured.

This is considered the largest man-made, non-nuclear explosion even up to now. Approximately two square kilometers of the city was obliterated and wiped out. The neighbouring communities of Dartmouth and Richmond were also affected. The blast also caused a tsunami in the harbour. The tsunami caused a pressure wave of air snapping trees, demolishing buildings and grounded vessels and blowing fragments kilometres from the explosion site. On December 20, 1987, the Philippines was the center of the world’s attention once again. Tragedy struck when MV Doña Paz, an overcrowded passenger ferry, sank after crashing into the oil tanker Vector loaded with 8,800 barrels of petroleum. The ferry was on its way to Manila from Catbalogan, Samar. Within minutes, the ferry sank giving the victims no time to launch the lifeboats.

Initially, official reports claimed that 1,565 people were killed but others insisted that the death toll is more than 4,000. The licenced maximum capacity of the ferry is 1,518 but there were 1,568 people listed on the manifest. A huge fraction of the passengers were unmanifested. It is the most tragic documented peace-time maritime accident in history. 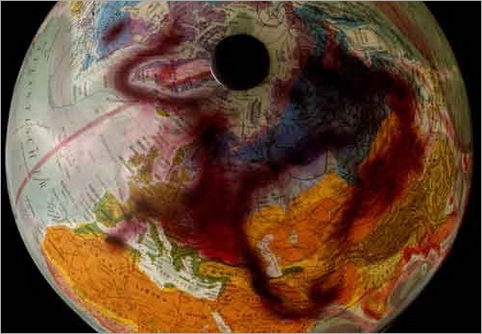 The worst nuclear power plant accident in the world occurred at the Chernobyl nuclear power station in Ukraine, then a part of the Soviet Union, on April 26, 1986. The place had four reactors, each could produce 1,000 megawatts of electricity.

On the eve of the accident, a team of engineers started an experiment on one of the reactors. Having little knowledge of reactor physics, the experiment went from a bit awry to downright deadly. Errors were made worse by more errors, which eventually resulted in a nuclear meltdown and in an explosion the next day. The blast blew off the reactor’s heavy steel lid.

Contrary to what was initially suggested, the explosion wasn’t nuclear but chemical, ensuing fire and releasing over 50 tins of radioactive materials into the atmosphere. In the early days of the crisis, 56 people died and dozens more suffered severely from radiation burns. But the casualties grew higher and higher as people were exposed to radiation.

Eventually, approximately 4,000 Soviet citizens lost their lives to cancer and other illnesses induced by radiation. The health of millions of people was also adversely affected. 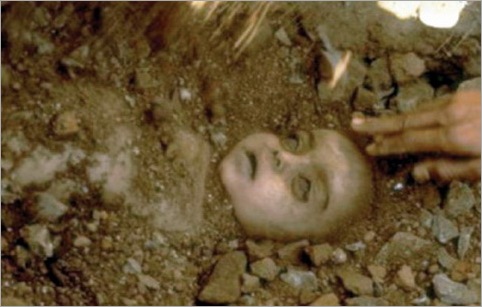 The list starts with a train accident in India. This South Asian country also caps off the list with the worst accident in history. In the morning of December 3, 1984, the people of Bhopal in the state of Madhya Pradesh woke up to an abominable day. Others did not wake up at all. A holding tank of a Union Carbide chemical plant leaked out 40 tonnes of toxic gas (methyl isocyanate), rolled on the ground through several surrounding residential streets. The residents who breathed in the poisonous gas in their sleep died instantly. Others were able to run away.

About 500,000 people were exposed to the fatal gas. Of this number, 2,500 to 5,000 died immediately after the inhalation. To this date, approximately 20,000 are believed to have died from complications caused by the leak. It is said that on the average, one person dies from the effects every day.

Today, over 120,000 are still suffering from cancer, blindness, serious birth defects, breathing difficulties and other health complications caused by the accident. This certainly secures India a place on the map of tragic accidents because even up to this day, the Bhopal disaster is considered the world’s most tragic industrial accident in history.