Bizarre Sea Slug Is Half Plant, Half Animal 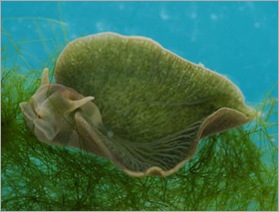 It looks like any other sea slug, aside from its bright green hue. But the Elysia chlorotica is far from ordinary: it is both a plant and an animal, according to biologists, who have been studying the species for two decades.

Not only does E. chlorotica turn sunlight into energy — something only plants can do — it also appears to have swiped this ability from the algae it consumes.

Native to the salt marshes of New England and Canada, these sea slugs use contraband chlorophyll-producing genes and cell parts called chloroplasts from algae to carry out photosynthesis, says Sidney Pierce, a biologist at the University of South Florida in Tampa.

That genetic material has since been passed down to the next generation, eliminating the need to consume algae for energy.

However, the baby slugs can’t carry out photosynthesis until they’ve stolen their own chloroplasts, which they aren’t yet able to produce on their own, from their first and only meal of algae.

"We collect them and we keep them in aquaria for months," Pierce told LiveScience, "As long as we shine a light on them for 12 hours a day, they can survive [without food]."

Pierce and his colleagues used a radioactive tracer to ensure that the slugs are now producing the chlorophyll themselves and not gathering it from algal contamination in the aquaria.

Crustacean biologist Gary Martin of Occidental College in Los Angeles sums it up in one word: “Bizarre”.

“Steps in evolution can be more creative than I ever imagined,” said Martin.