The world’s oceans abound with shipwrecks and a multitude of other nautical artifacts. Lurking deep beneath the waves of the planet’s most inhospitable waters are some of history’s most grand and feared ships, presenting divers with a fascinating incarnation of a bygone age. But what about those among us who don’t scuba dive? Here are 9 corroding old vessels that can be seen clearly from the relative safety of terra firma. 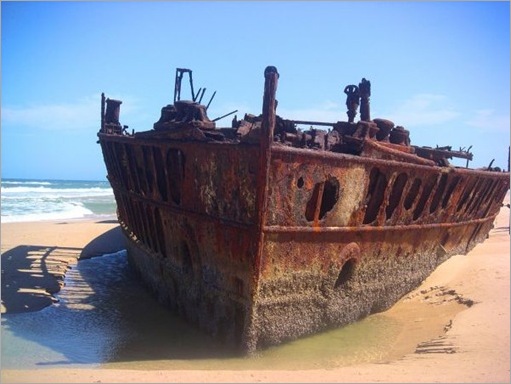 Fraser Island off the coast of Queensland in Australia is the largest sand island in the world and a breathtaking place to visit. But its most notable man-made landmark is easily the wreck of the SS Maheno. The Maheno had a varied history: built in Scotland in 1905 as a luxury passenger liner for the trans-Tasman crossings, it served as a hospital ship in the English Channel during before being declared outdated in 1935. That same year, the ship was being towed to Melbourne when a cyclone struck, setting it adrift for several days before it finally became beached on Fraser Island. It has since been used for target practise by the Royal Australian Air Force and is now a popular tourist attraction. More than three storeys of the vessel are reportedly buried beneath the sand. 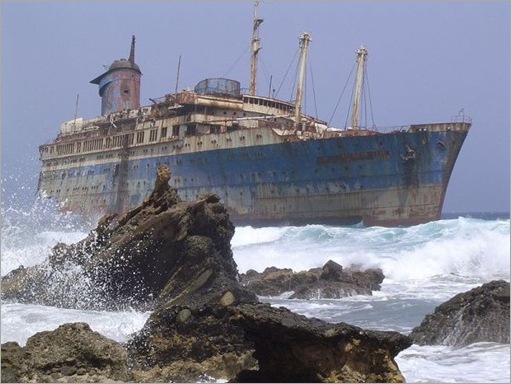 The incredible image above shows the wreck of the SS American Star, built in 1940 for United States Lines and wrecked in January 1994 off Fuerteventura in the Canary Islands. At the time of the accident, the vessel was being towed to Thailand to be used as a floating hotel… More to come on this one later! 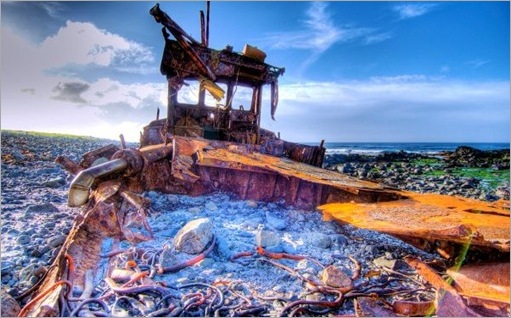 This rusty old vessel (above) was captured on the archipelago of the Chatham Islands, New Zealand, in September 2007. The islands are named after the ship HMS Chatham of the Vancouver Expedition, captained by William Robert Broughton, who claimed possession of the archipelago for Great Britain in 1791. But it’s fair to say that this old boat doesn’t quite date back to that period in history. Today, the islands have a grand population of 609 people of European and Maori descent, with surroundings that conjure an atmosphere of exploration and adventure harking back to the early settlers. 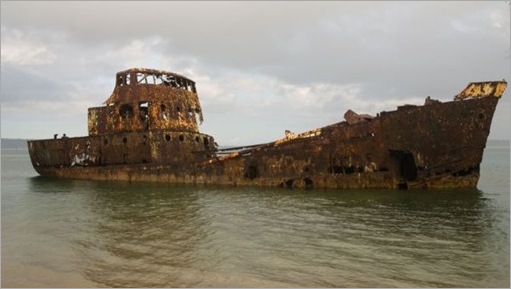 This ill fated ship ran aground here in the early 1980s when Cyclone Uma lashed the islands of Vanuatu. The volcanic archipelago in the Melanesia region has doubtless seen countless shipwrecks in its time. This one has rested on the reef since the day it foundered, and has since become a popular tourist attraction. 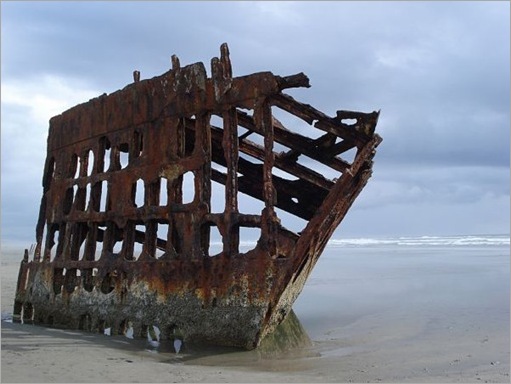 Jutting out of the sand along the northwest coast of Oregon can be found the remains of the Peter Iredale, which ran aground here in 1906. Built in June 1890 in Maryport, northern England, by R. Ritson & Co., the vessel was attempting to enter the Columbia River when high winds literally drove her into the shore. Thankfully all 27 souls on board, including two stowaways, were saved. The weather scuppered any plans to tow the ship off the beach and it soon became embedded in the sand, where it remains to this day. Rumour has it that the ship’s skipper, Captain Harry Lawrence, waded ashore from the wreck armed with the log book and a bottle of whisky. He passed the whisky around his crew and offered up a final salute to his ship, saying: 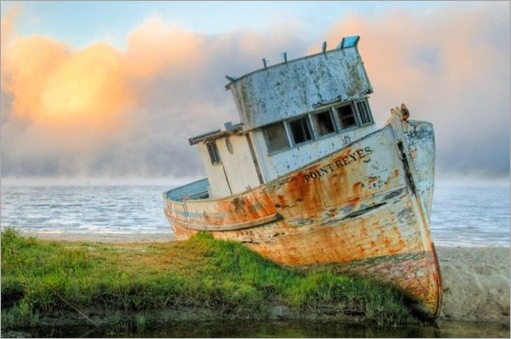 It might not be the most impressive looking wreck of all time, but the photographer has done a nice job of capturing the eponymous Point Reyes fishing boat. 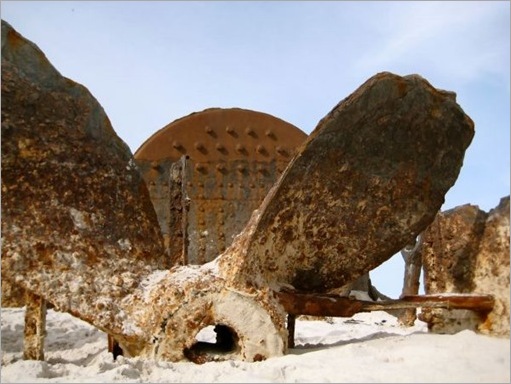 The two remaining propeller blades framing a rusty old boiler is all that remains of the Kakapo, which ran aground on May 26, 1900. On that fateful night, the Kakapo left Cape Town bound for Sydney, reportedly shrouded in “mist and fog”. The captain turned sharp east when he saw what he thought was Cape Point, which would have allowed him to cruise into False Bay. But unbeknown to him, what he had actually seen was Chapman’s Peak, and instead of turning into False Bay he rammed the ship on Noordhoek Beach, where it has been slowly rotting away for the last century. The Cape of Good Hope is known for its treacherous conditions, and was originally called The Cape of Storms. Since 1918, the Slangkop Lighthouse has ensured subsequent captains have not made the same mistake. 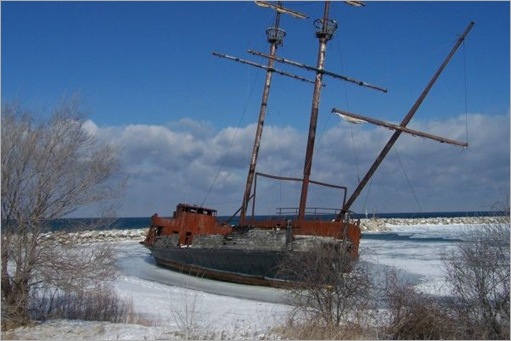 Can anyone fill in the blanks in on this one? Name of vessel? How it came to be washed-up here? What is known is that this amazingly intact shipwreck can be found on the shores of Lake Ontario. And if you think this is cool, the lake has a plethora of wrecks – some of them commanding important places in history. 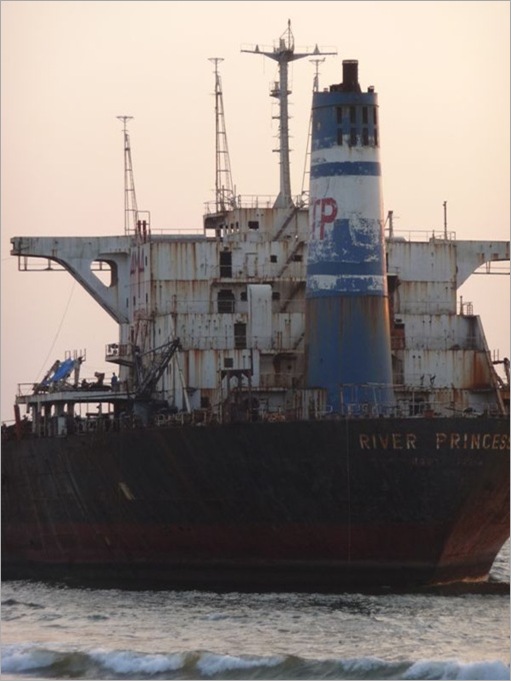 Perhaps more of an eyesore than historic wreck, the vast River Princess lies abandoned on Candolim Beach in Goa after it was washed-up in a storm. The local government, apparently, cannot afford to get rid of the ship, and by all accounts the water is so shallow that people can almost wade out to it – not recommended! One side of the hull has had a gaping hole cut out so that the sand and water that has gushed in will ensure the ship doesn’t move, preventing it drifting into the busy shipping lanes. Eyesore or not, this is one leviathan that could be with us for generations to come…