Beautifully Bizarre Beaches In All kinds Of Colors

There’s nothing so satisfying as creating a technicolor sand-sculpture masterpiece and blowing it to smithereens with some explosive mouse-clicking. But where does all that sweet, colored sand come from? Not food coloring, but from the world’s intersections of earth and ocean where crashing waves turn dense minerals and matter into tiny grains. And despite what your color-by-number book tells you, it’s not all yellow. 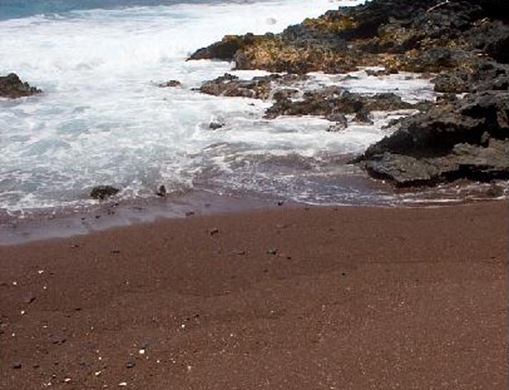 When a a breach in the Earth’s crust lets loose a geyser of magma, the volcanic ash and material has to go somewhere, and, quite often, forms a massive conical structure called a cinder cone. At Kaihalulu Beach, an ancient cinder cone crumbles into a bay as the tide erodes it further, ensuring its inevitable total destruction. In the meantime, the sediment from the cinder cone forms this beach of red sand. 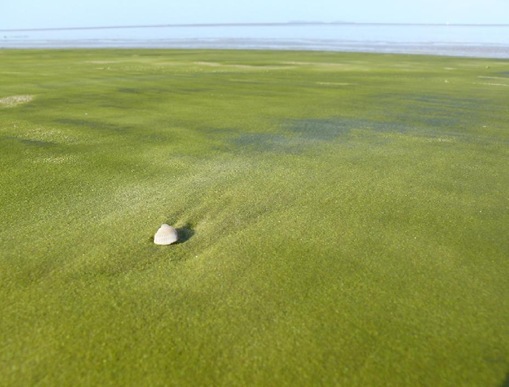 Likewise, at the nearby Papakolea Beach, another cinder cone rich in olivine minerals — a common component of Hawaiian lava — spills forth a surreal pasture of dark green sand. The beach is found at the end of a long hike on the south of the Big Island. 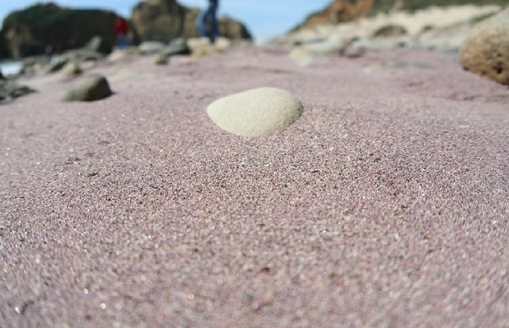 This beach looks like it’s been taken straight out of some Lisa Frank stationery. When the moonlight bounces off the slowly ebbing tide, the manganese particles that have colored the sand purple become a glowing, rippling aurora in the water. Start at the south of the beach and head north, where the sand gradually becomes even more violet. 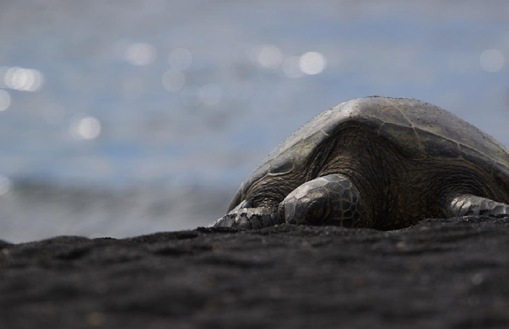 When a landslide of scorching magma hits the sea, it immediately explodes, cooling on impact, and the remaining basalt and pumice particles end up getting smashed and eroded into jet-black sand, as on the beaches of Santorini. Kamari, Perissa, and Monolithos beaches are the best known for their black beaches, but you’re likely to find them all over the volcanically active archipelago. 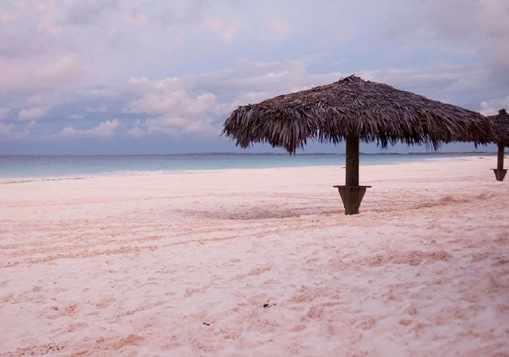 The sand at Harbour Island is made of bits of coral, broken shells, and calcium carbonate from minuscule marine invertebrates. The secret ingredient to its pinkish hue is the inclusion of tiny, microscopic amoeba — Foraminifera — which use bright pink or red shells as protection. 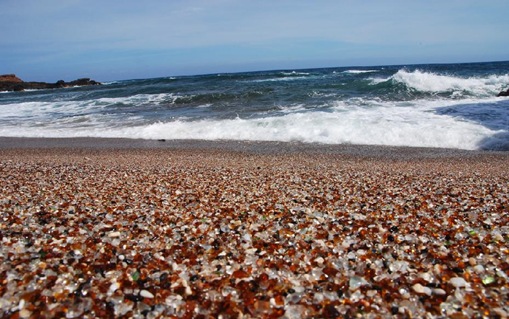 What was once the town dump has now become one of the most awe-inspiring man-made beaches you’re likely to see anywhere. Shards of broken glass have been smoothed by decades of tidal impact. Visitors are at first wary of stepping on a stray, jagged shard but soon realize it’s just as comforting to sink their feet into pebbles of glass as it is with grains of sand. 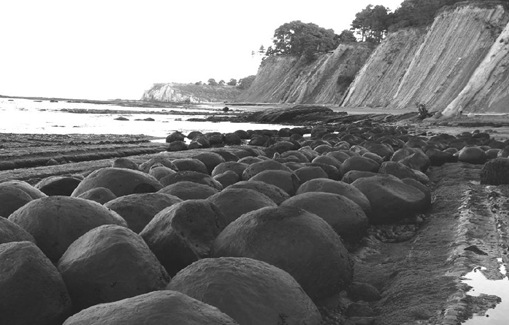 At Schooner Gulch in Mendocino, something strange has happened. Thousands of rocks have convened to face the tides like a Terracotta Army of small boulders. They’re all of equal size, all uniform in their spacing. It isn’t the best beach to build a sandcastle, but by far unlike any other coastline you’ve ever experienced.