Nature is a great designer, it always creates something special, like Albino Animals. Scientifically, pigments are the chemicals in our bodies that give us our colors. When a bird or other animal makes no pigments, the condition is called albinism, the animal being called an albino. However, personally, I still believe it is an amazing creation of nature. Here is a collection of albino animals, probably one of the cutest galleries yet. Hope you enjoy.

The animal shown here might not all albino, thanks for all those who help to correct me… but at least there is a good collection of rare white animal… hope you still enjoy. 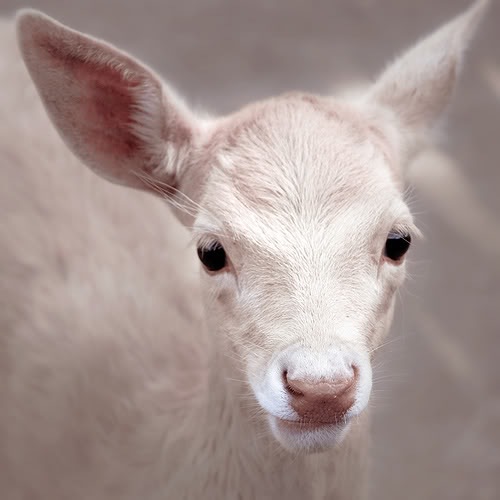 Only about one in 30,000 white-tailed deer is a true albino like this fawn! There are also white deer who are not albinos. These are the result of a color mutation similar to the one responsible for pinto horses, affecting only hair color but not eye or skin or hoof pigments. No, that's not a giant guinea pig-- it's a Nutria. These large, semi-aquatic rodents have been bred in captivity in several colors for fur production, but most wild individuals are solid brown and look like large muskrats. Albino nutria are very uncommon but not unheard-of. One was even taken into police custody in May of 2009, in Lake Oswego, Oregon, after a frightened homeowner called police to remove the strange animal that had become trapped in a crate. 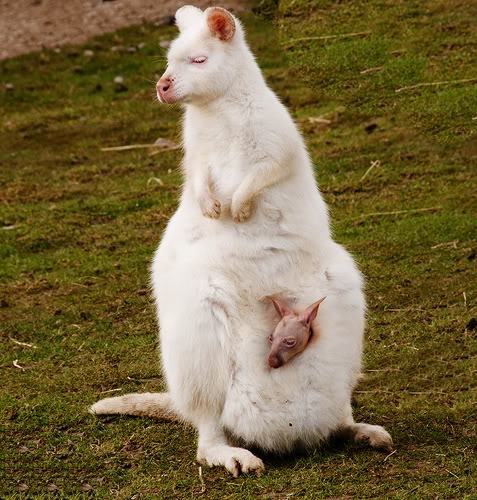 Albino wallabies occur very rarely in the wild, but are more common in captivity due to inbreeding that can bring out a hidden gene for albinism. This albino wallaby has passed on her albinism to the joey in her pouch. 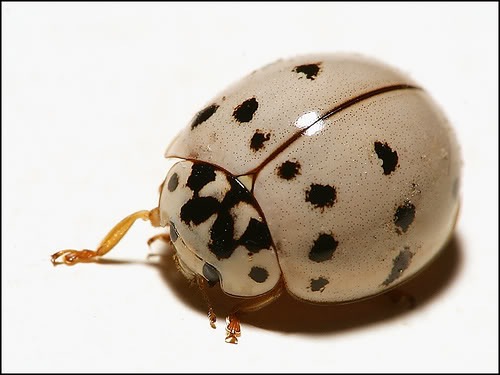 Albino ladybugs are at quite the disadvantage, lacking the red and black coloring that dissuades predators from munching on their normally colored relatives.

Turtles sold as "albino" are usually actually amelanistic, meaning totally lacking in the pigment melanin. In a human or most mammals, amelanstic individuals would be true albinos (lacking all pigment) because melanin is the only pigment present. However, many reptiles also have xanthin and etherin pigmentation, meaning amelanistic reptiles may be yellow, orange, or pink instead of completely white. 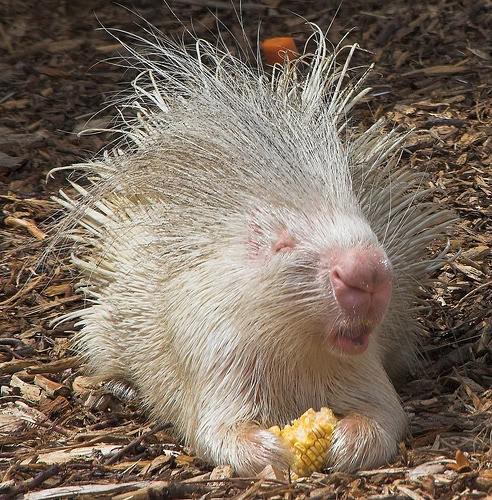 Albino porcupines in the wild are often a source of great confusion for observers, as they often are very difficult to recognize as porcupines due to the lack of distinctive striped quills. Some also have softer, hair-like quills rather than the sharp stabbing implements wielded by normally colored porkies. 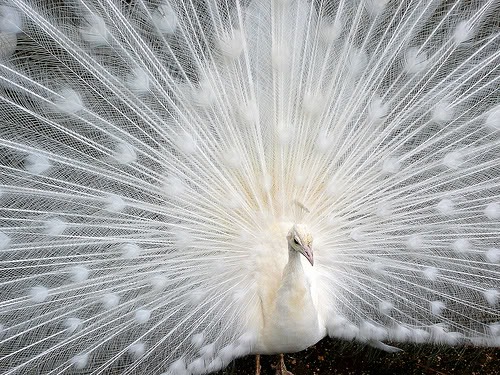 White peacocks aren't actually true albinos. They're a color variation of the Indian Blue Peacock. While albino peacocks do exist, the white color mutation is much more common.

This monitor lizard is amelanistic, rather than a true albino. He has no melanin, but other pigments produce the yellow color that you see on his body. 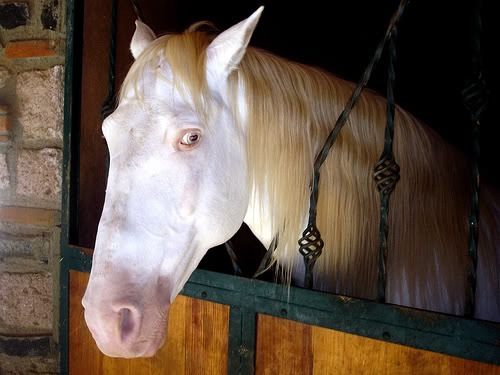 This horse has almost all the characteristics of a true albino, but there are in fact no albino horses. This horse is likely white due to two copies of the creme gene, which is a partially dominant gene that produces cremello or perlino foals when homozygous. 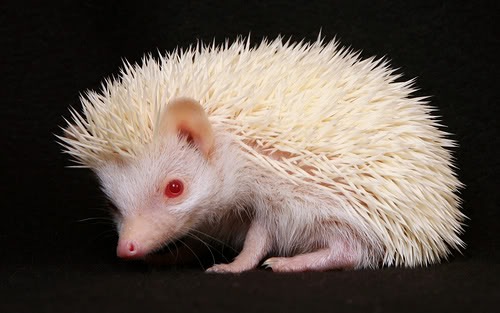 I have one of these! 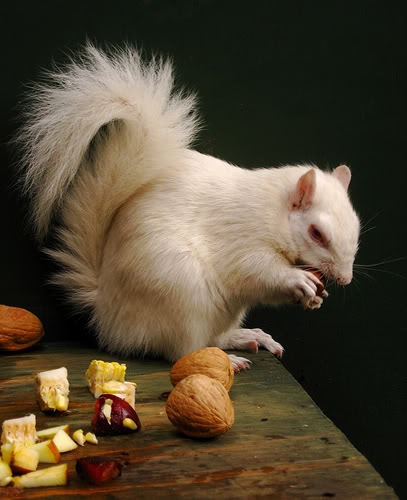 I don't know about you, but I'd be afraid to try to take this squirrel's nuts. He looks pretty protective. Speaking of protective, there's a whole society dedicated to the preservation of albino squirrels. Now that's nutty! 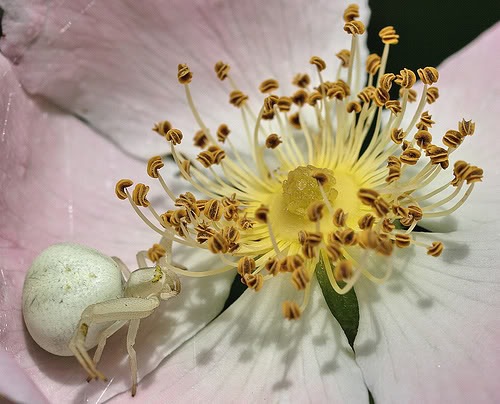 Anyone know what type of spider this is? I couldn't find anything identifying it. Giorgio_f took this lovely photo of it tending to its garden. At least, that's what I'd rather believe it's doing, as opposed to waiting to suck the guts out of anything smaller than itself that comes along. Or get in my hair. I hate that. 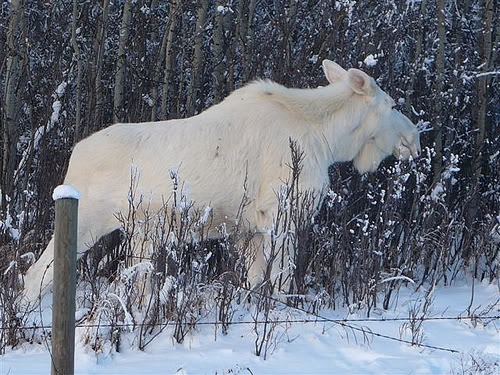 This moose has developed camouflage to protect himself from Sarah Palin. Actually, he's just a very rare white moose-- 1 in 100,000 wild moose carry the white gene. In south-eastern Idaho, however, as many as 1 in 10,000 may be white. 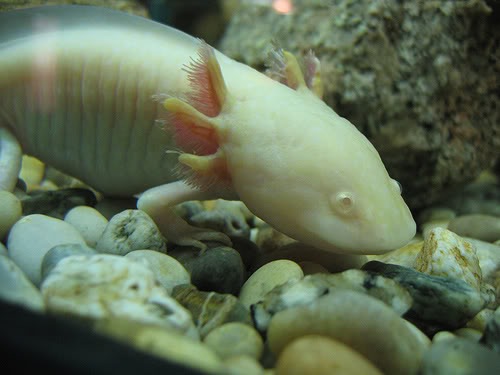 As if they aren't strange looking enough when they're colored! 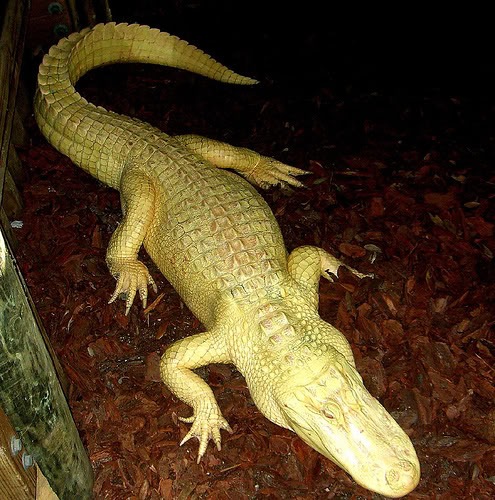 No, that's not a horror movie set-- it's a real albino alligator. For quite some time it was believed that there were no albino alligators because most white hatchlings were eaten before anyone saw them, due to their lack of camouflage!