Home / Places / Travel / 13 Most Extraordinary Churches of the World

13 Most Extraordinary Churches of the World

… the most wonderful buildings on earth are probably churches, monasteries and other religious structures. You can do much more with a lot of faith and a lack of money than with a lot of money but without any faith. 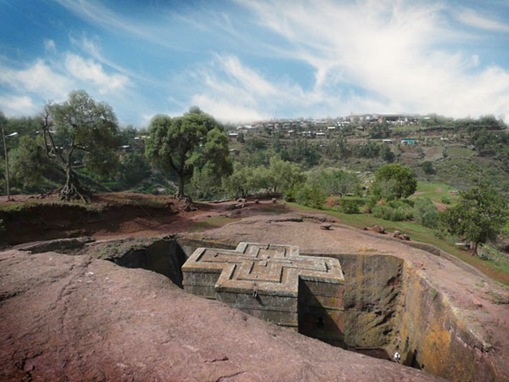 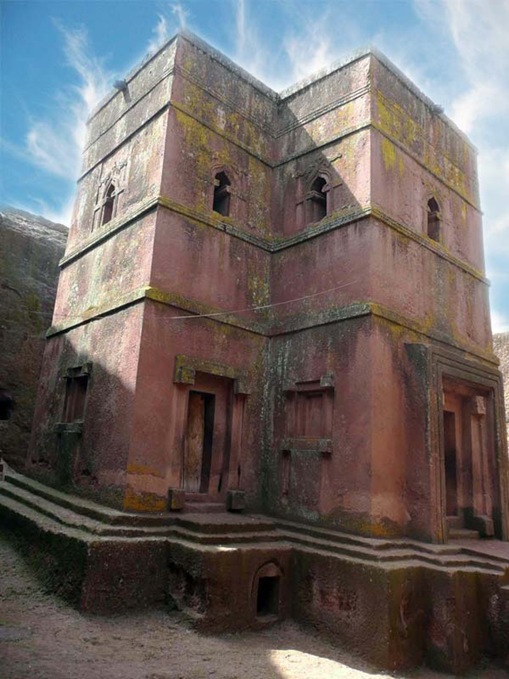 Possibly the most famous of Lalibeli’s churches, the Church of St. George is completely carved out of stone in the shape of a cross. 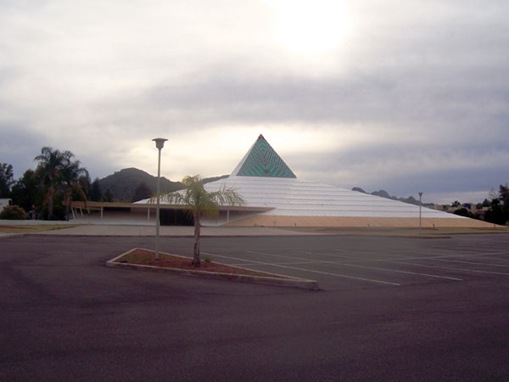 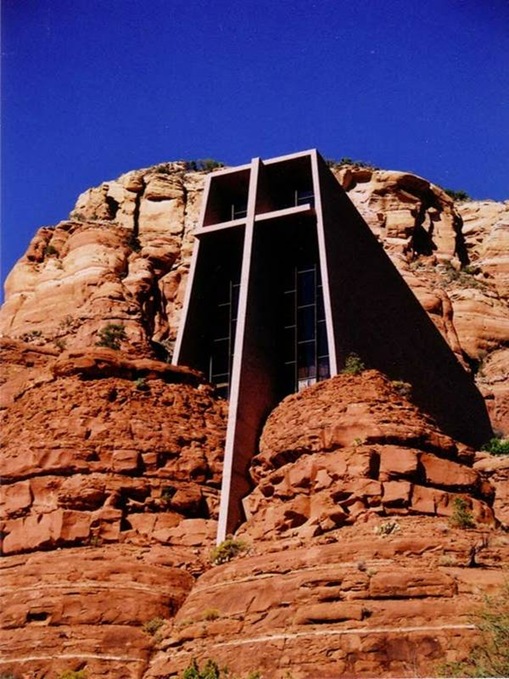 This facinating Roman Catholic church is literally built into the rock. The views from outside are unbelievable but the serenity inside is awesome

Some say, that Chapel in the Rock can move even the non-religious. 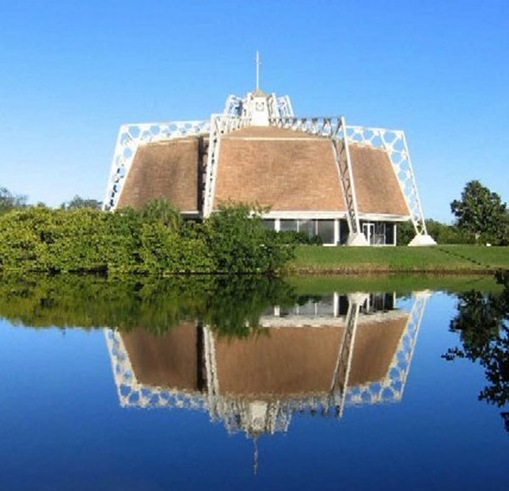 A kid on the tour to Eckerd College once said it looked like a “Jesus spider from outer space.” Inspired by 20th-century architect

Eero Saarinen, the Chapel was designed by the highly respected Chicago architectural firm of Perkins and Will. Its key design features are its octagonal shape and in-the-round seating, the oculus at the center of the roof that directs sunlight to the center of the sanctuary, the lower glass panels which reflect light from the water outside to the interior, and the girders which recall the flying buttresses of the medieval cathedral, instilling a sense of timelessness in a contemporary structure. 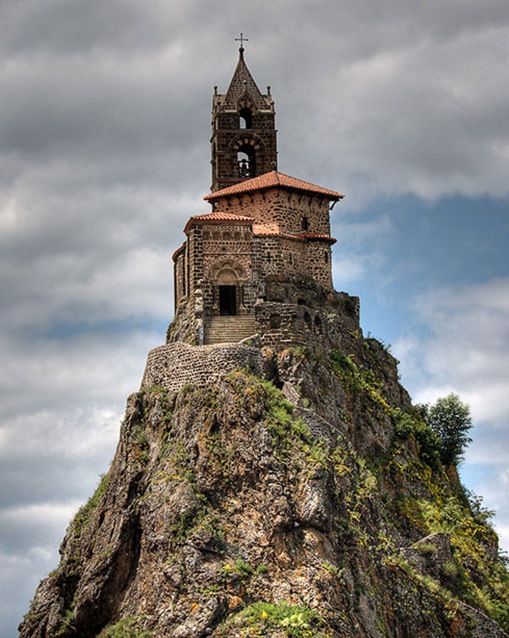 Perhaps one of the most remarkable sights in France, a chapel perched on a volcanic plug. This is the Rock of Aiguilhe, on the edge of the town of Puy en Velay, in the Auvergne. The Chapelle Saint-Michel has stood there for 1042 years, since Bishop Gothescalk had it built in 962 on his return from a pilgrimage to Santiago del Compostella in Galicia. In 1955 workers found relics under the alter that had been there since it was built.

6.The Chapel on the Rock (Allenspark, Colorado, USA) 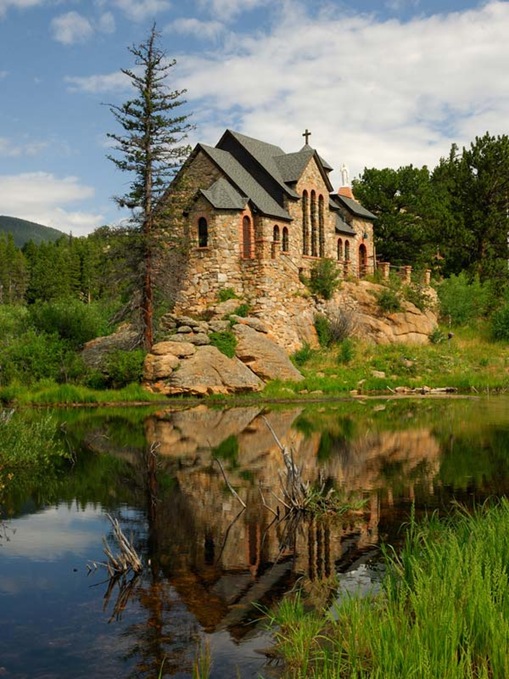 The founder of Camp St. Malo, Monsignor Joseph Bosetti, had for years entertained an idea that one day he would build a chapel on this site. In 1916 he and two friends observed a falling meteor during the night and in his search for the remnants the next morning, he came across a large rock. The beauty of the land inspired the priest and he remembered Jesus’ words to Peter: “Upon this rock, I will build my Church.” (Matt 16:18).

Vowing one day to build a chapel here, Msgr. Bosetti prayed for nearly 20 years to acquire the funds. During time, he found himself in a constant battle with the Colorado Highway department which had plans to dynamite the enormous piece of granite to both widen and straighten the curve in the road.

Eventually, Msgr. Bosetti won the battle and years later, when the chapel became a reality, it was reported that a group of engineers who laid out the road came to the dedication and thanked him for his perseverance.

The chapel was designed by noted Denver architect Jacques Benedict.

In 1993, Pope John Paul II visited the chapel during his trip to Denver for the World Youth Day and bestowed his personal blessing on the chapel. 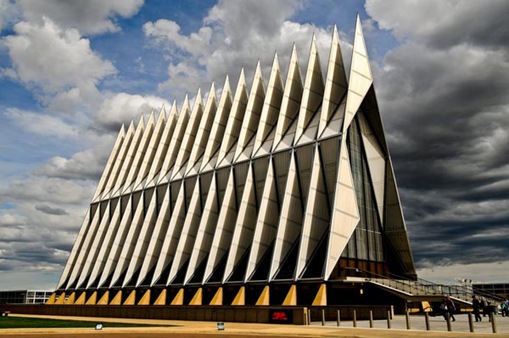 The United States Air Force Academy Cadet Chapel, completed in 1962, is the distinguishing feature of the Cadet Area at the United States Air Force Academy. It was designed by renowned architect Walter Netsch of Skidmore, Owings and Merrill of Chicago. Originally controversial in its design, the Cadet Chapel has become a classic and highly regarded example of modernist architecture. The Cadet Chapel was awarded the American Institute of Architects’ National 25 Year Award in 1996, and as part of the Cadet Area, was named a U.S. National Historic Landmark in 2004. 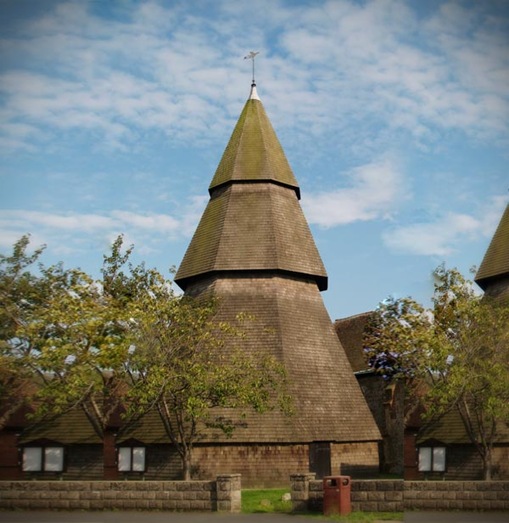 “Yes the late 12th century, wooden, bell tower is separate from the rest of the church! Apparently it is the only one of its size and shape in the country. Originally it was open to the elements the cladding being addedin the 15th century. You almost can’t take a picture of this lovely church without getting that litter bin or telephone wires (or both) in frame; the litter bin is even in all the guide books!”

9. The Church of Hallgrímur (Reykjavík, Iceland) 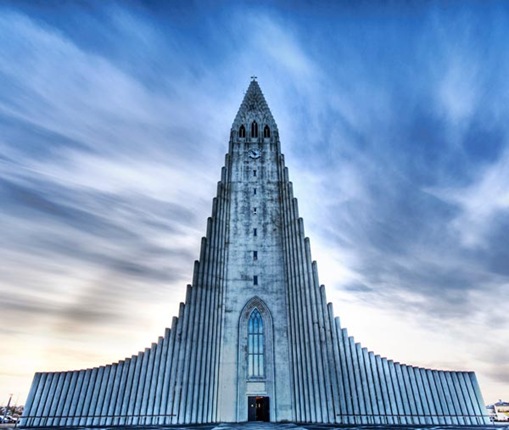 The Church of Hallgrímur is a Lutheran parish church which is also a very tall one, reaching 74.5 meters (244 ft) height. It is the fourth tallest architectural structure in Iceland. 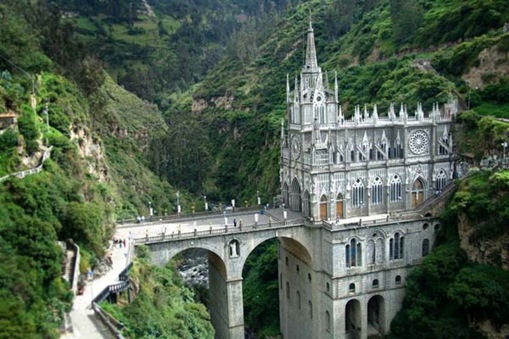 Las Lajas Cathedral was built in 1916 inside the canyon of the Guaitara river where, according to local legend, the Virgin Mary appeared.

You can find it in southern Colombian Department of Nariño, municipality of Ipiales, near the border with Ecuador. 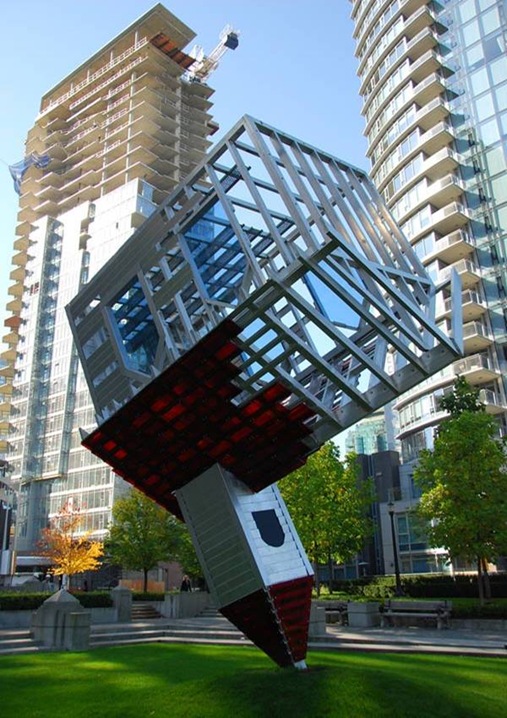 It was too hot for New York City; too hot for Stanford University. But a controversial, imposing sculpture by renowned international artist Dennis Oppenheim finally found a public home in laid-back Vancouver.

A country church is seen balancing on it’s steeple, as if it had been lifted by a terrific force and brought to the site as a device or method of rooting out evil forces. 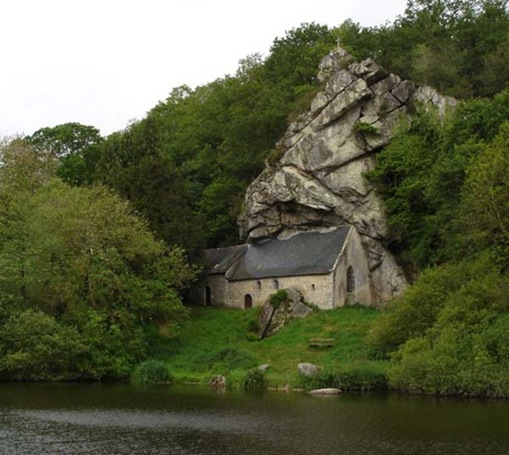 Mads: “This is the chapel of St-Gildas, which sits upon the bank of the Canal du Blavet in Brittany, France. “Built like a stone barn into the base of a bare rocky cliff, this was once a holy place of the Druids. Gildas appears to have travelled widely throughout the Celtic world of Corwall, Wales, Ireland and Scotland. He arrived in Brittany in about AD 540 and is said to have preached Christianity to the people from a rough pulpit, now contained within the chapel.” (from ‘Cruising French Waterways’ by Hugh McKnight p.150)” 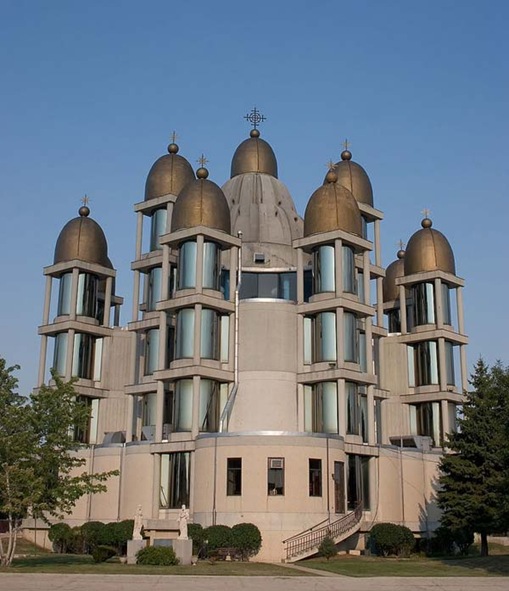 It’s massiveness and gray color looks like Soviet architecture. I was amazed when I read that it was actually in USA and not in Soviet Union.

It is celebrating its 53 years, so it was built in 1956 (if panda’s calculations are right).