Most people have heard of the Ring-tailed Lemur and could suppose that it is the only species. However, there are many varieties of Lemur, a lot of which are beautiful and incredibly rare. Take a look in to the planet of the lemurs and discover for yourself the wonderful diversity of this lesser known family of animals.

This exquisitely colored species is critically endangered and part of its habitat in Madagascar has recently been made in to a National Park. This may at least ensure the survival of some of the species but as it is unable to tell where it is safe for itself, many of the animals live outside the park’s boundaries and are still prey to humans as “bush food”. Who could possibly bring themselves to eat this delightful animal in the full knowledge that it is nearing extinction?

Does what it says on the label! Its name gives the game away but this unusual lemur has blue eyes, which gives it a distinctly spaced-out look. Due to deforestation on its home island of Madagascar it is thought that there are less than one hundred of these startlingly beautiful creatures left in the wild. As a number of plant species evolved specifically to be spread by this species, a whole eco-system is at the point of collapse.

The Black and White Ruffed Lemur

This wonderful beast is not too good as a next door neighbor. Apart from the Howler Monkey it is thought that the Black and White Ruffed Lemur has the loudest call of all primates. It is the only lemur that has litters – all the other species produce a single young, one at a time. It is also notable for having a muzzle like a dog!

This shy creature lives in the deciduous forests of Madagascar but also spread to the Comoros islands. It is thought that man is responsible for the spread but the reason for its introduction to the Comoros is unknown. It lives in small family groups and gets nasty when it is discovered by other Mongoose Lemurs that are not part of its small family unit.

The Red-Fronted Brown Lemur lives in two parts of Madagascar, the western coast and the east of the island. The behavior of the species in the two areas is slightly different. In the east a single male will dominate a group and no other lemur will mate with the females. In the east there seems to be much more of a share and share alike attitude adopted towards sex and who is allowed to reproduce!

This is one of the more tourist friendly varieties of lemurs and actually displays curiosity about their human visitors when the two species converge in Madagascar. They will even pose for photographs! It is classified as cathemeral, which means it is active during both the day and night ad as such is one of the few lemur species to do so.

The Crowned Lemur has a lovely strip of red across its forehead, hence its name and does have the look of a small girl going to a party dressed as a princess! It lives mostly on the Ankarana Plateau of Madagascar and at the very most there are only ten thousand of them on the island. This is the lemur most likely to give birth to twins and it lives for around twenty years. 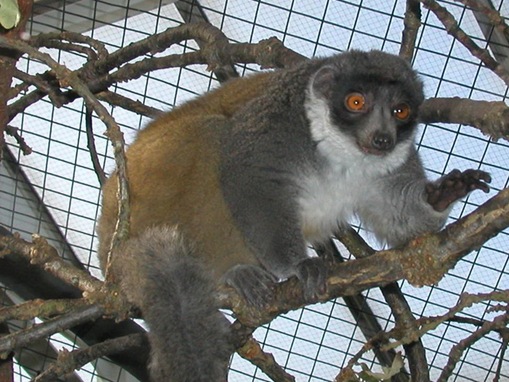 This beautiful beast is a bamboo lemur, even though it doesn’t actually eat bamboo. It is the one and only primate that has adapted to living off papyrus reeds and it chomps it way through tem alongside Lake Alaotra. As such there are very few of these lovely and engaging creatures, although the Durrell Wildlife Conservation Trust does have a protection program underway in order to ensure the continuance of this (possibly sub) species of lemur.

The Golden Bamboo Lemur does, however, actually eat bamboo. Shamefully, it too is on the list of critically endangered species and it is thought that there are less than a thousand of them alive in the wild. It eats more than enough cyanide each day to kill an average human but how it detoxifies itself against the poison is not known or understood at all.

The sportive lemurs are a whole different branch of the lemur family tree. They are strictly nocturnal and live in the trees most of the time. When on the ground they hop along in a way reminiscent of kangaroos. Sportive lemurs are solitary and although they look cute they will protect their territory with violence when they come across same sex interlopers. Like most of the species here they are endangered due to deforestation and man’s blind and willful intrusion in to their only habitat.