Home / Nature / Sahara - The largest of all deserts

Sahara - The largest of all deserts

The largest of all deserts is the Sahara. This vast sunbaked land of barren rock, gravel, and shifting sand stretches across northern Africa. Burning sun and scorching winds make it the hottest region in the world in summer. Palm trees and crops can be grown only where there is a spring, a well, or a stream. These fertile spots are called oases (singular, oasis).

The name Sahara comes from the Arabic word saharaʾ, meaning “deserts.” Almost as large as the entire United States, the Sahara covers 3.5 million square miles (9 million square kilometers). It extends some 3,000 miles (4,830 kilometers) from the Atlantic Ocean to the Red Sea. Southward it spreads an average of 1,000 miles (1,600 kilometers) to the region of the Niger River and Lake Chad in the Sudan. The great desert contains at least a part of Western Sahara, Mauritania, Morocco, Algeria, Tunisia, Mali, Niger, Chad, Libya, Egypt, and The Sudan (see Africa). 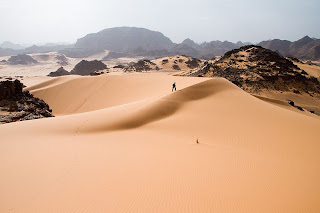 The Sahara is one of the Earth's low-latitude deserts that extend inland from west coasts in and near the tropics (see desert). The dry winds that blow over the hot land seldom drop rain except where mountains force the air upward, thus cooling it. Elsewhere rain falls only when a powerful cyclonic storm invades the region, bringing a downpour. In some areas such storms occur only once in ten or more years. 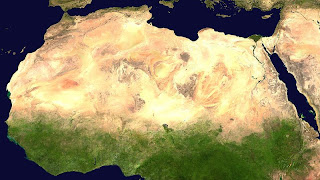 During the hot days the wind raises little whirlwinds of dust, called “waltzing jinns.” At times a furious, dust-laden wind, called the simoom, sweeps the land.

Much of the Sahara is a series of plateaus. They average 1,000 feet (300 meters) in altitude. Across it from southeast to northwest runs a broad, rocky ridge. This chain reaches its greatest general elevation in the central Sahara, forming the Ahaggar mountain mass. The highest mountains, however, rise in the Tibesti group to the east. Here is the extinct volcano Emi Koussi, the Sahara's highest elevation at 11,204 feet (3,415 meters). 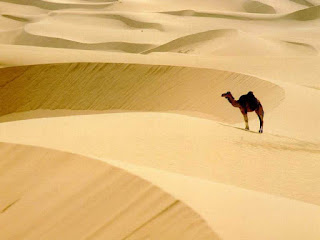 In the Sahara are various surface formations common to most deserts. Here are rocky uplands, called hammadas, broad stretches of gravel, sand dunes, and basins filled with drifting sand, called ergs. Though the dunes are the most picturesque feature, they occupy only about one eighth of the area. Travel routes avoid them. The Libyan Erg near Egypt holds the greatest mass of dunes on Earth. It covers an area as large as France. The hot sand may give rise to the scorching Egyptian khamsin wind.

The Nile and the Niger rivers cross the edges of the Sahara. There are no other permanent streams. Dry streambeds, called wadis, seam the desert. Travelers are warned against camping in them, however, because the beds may fill with torrents of water during the rare downpours. Some wadis mark the course of underground streams. Vegetation fringes these courses where the water table is near enough to the surface to be reached by plant roots. An oasis develops where the water supply is sufficient to support substantial plant growth. 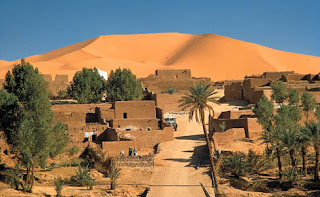 In the northwestern Sahara, at the base of the Atlas Mountains, runs a narrow strip of green oases. It extends southeast 750 miles (1,207 kilometers) to the foothills of the Ahaggar. Another depression, the Fezzan, lies between the Ahaggar and Tibesti mountain groups, in the southwestern section of Libya.

Despite its dryness, the Sahara has scattered plant and animal life. Shrubs and other plants resistant to evaporation send their long roots toward underground water, and coarse grass grows in widely separated bunches. Soon after the rare rains, a carpet of delicate, quick-blooming flowers is spread. (See also plant.) 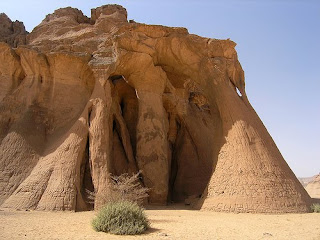 Mammal species found in the Sahara include the gerbil, desert hedgehog, and other rodents; the aoudad, or Barbary sheep, the Dorcas gazelle, and the Nubian wild ass; the anubis baboon; the spotted hyena; the pale fox, or African sand fox; and the Libyan striped weasel and slender mongoose. The more than 300 bird species found there include water and shore birds in coastal zones and along waterways, and ostriches, owls, eagles, ravens, and guinea fowl in the interior. Frogs, toads, and crocodiles inhabit the lakes and pools of oases. Lizards and cobras live among the rocks and dunes. Desert snails may remain dormant for years between reviving rainfalls.

The Sahara was not always a parched desert as it is today. Throughout the Ice Age, the huge glaciers and ice caps of Europe pushed the zone of temperate climate southward. The Sahara was then a rich grassland and hunting ground for prehistoric people. Relics of these people include stone tools and rock carvings on sheltered cliffs and walls of caves. 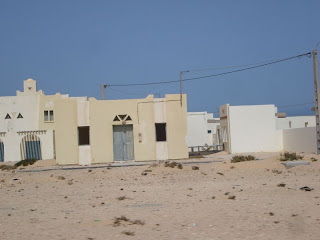 These early inhabitants of the region may have been the ancestors of the Berber people of northern Africa. The Berbers are an ethnic group of people who inhabited North Africa prior to the invasion and settlement of the area by Arabs in the 7th century AD. After the invasions, many Berbers were converted to Islam and assimilated into Arab society. Today, the Berbers live in tribes scattered across the countries of North Africa. The various tribes speak distinct languages—however, all of the Berber tongues are more closely related to ancient Egyptian than to Arabic. Many Berbers speak Arabic as well. (See also Arab; Moors.)

By early ancient times, the Sahara was dry and hot as it is today. The northern coastal strip supported warlike people who made trouble for their neighbors. Raiders from the Libyan Desert invaded Egypt. The Carthaginians, and later the Romans, had to keep a watchful eye on the Numidians, who inhabited an area roughly correspondent to that of present-day Algeria.

The vast desert barred travel to central Africa. During the days of the Roman Empire, however, people learned to use the camel for desert travel (see camel). Berbers from the Mediterranean coast filtered southward. They improved irrigation systems and planted date palms. Arabs with long camel caravans crossed the Sahara to collect ivory and gold, animal skins, and ostrich feathers. They also imported slaves from central Africa.

The camel provided a perfect mount for the Tuareg, a pastoral Berber people who dominated much of the central Sahara. Before the arrival of Europeans, the raiding of caravans and travelers was an important means of acquiring goods. The Tuareg also traded with merchant caravans, but the number of these caravans declined as motor vehicles became available. In the late 20th century increasing urbanization and the occurrence of devastating droughts across the savannas bordering the southern Sahara led many Tuareg to abandon their traditional livelihoods of raising and herding livestock.

How People Live in the Sahara

Some of the people who live in the Sahara raise crops on irrigated land in an oasis. Others tend flocks of goats, sheep, and camels. These herders find grass for the stock along the desert's fringe or where sudden rains have fallen. They live in tents so they can move easily as soon as the grass is eaten in one place. 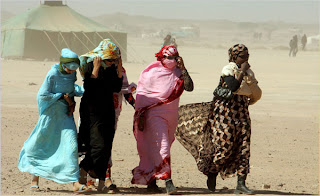 The nomads wear long woolen robes called barracans for protection against the hot sun and stinging sandstorms. They wear turbans wound around the head and neck and sandals to guard their feet on the hot ground. They eat dates from oasis palms and cheese made from the milk of goats and camels. Water is a scarce and precious resource. In the markets of the oasis villages people trade wool, hides, and some of their animals for dates, coffee, and manufactured articles (see nomads).

Through the centuries palm-shaded oases have been ports of call for thirsty caravans. Here they made stops to rest, pasture, and water their camels. Many oases grew into fortified villages. The larger ones have a citylike appearance, with narrow, roofed-over streets and buildings several stories high. 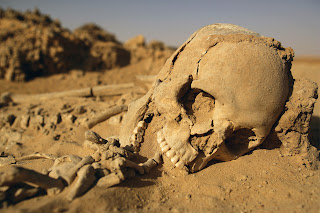 The spread of modern transportation increased after World War II, when the French began exploring and developing the petroleum and gas resources of Algeria. Pipelines were laid to carry the oil to Mediterranean ports. Caravan trails were changed into roads covered with a tar that withstands the heat. Four such roads cross the desert from north to south. Airports were built at the chief oasis towns and at oil and gas fields. In the late 20th century increased urbanization and devastating droughts across the southern Saharan savannas led many Tuareg to abandon their traditional pastoral lifestyles.

The discovery of petroleum and natural gas reserves in Algeria attracted international interest in exploring and developing the Sahara. Soon other oil and natural gas fields were discovered in Egypt and Libya, and large deposits of such minerals as iron ore, copper, and manganese were found as well. Uranium is widely distributed in the Sahara and has been particularly important in Niger. (See also Algeria; Niger.) 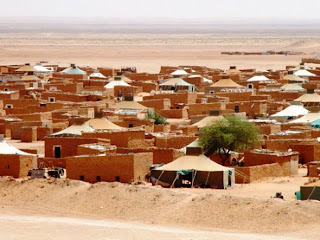 In 1960 France began testing nuclear weapons in the Algerian desert. After protests from African nations, the test site was abandoned. An agreement for Algerian independence, signed on March 18, 1962, included arrangements for joint control over Algerian oil fields and a split of the profits from all petroleum sales. There was large-scale development and population expansion of the Sahara in the 1960s.

A severe drought in the late 1960s and early 1970s, caused by vastly increased numbers of livestock and their subsequent overgrazing of the land, devastated the region's economy. Agricultural programs implemented in the 1980s at the Sabha and Al-Kufrah oases in Libya produced good crops of wheat and fruits.