Colosseum, largest and most famous ancient Roman amphitheater. The emperor Vespasian, who ruled Rome from ad 69 to 79, began construction of the city’s Colosseum and his son, the Roman emperor Titus, dedicated it in ad 80. The Colosseum was completed by Vespasian’s younger son, Domitian, who succeeded Titus as emperor in 81. The structure was originally called the Flavian Amphitheater. Modifications and restorations necessitated by fires and earthquakes were made to the Colosseum until the early 6th century. In succeeding centuries the Colosseum suffered from neglect, earthquakes, and damage done by builders. Still, slightly more than one-third of the outer arcades, comprising a number of the arches on the north side, remain standing. The inner skeleton, which supported the cavea (seating space), is also substantially intact. All marble, stucco, and metal decorations, however, are gone. 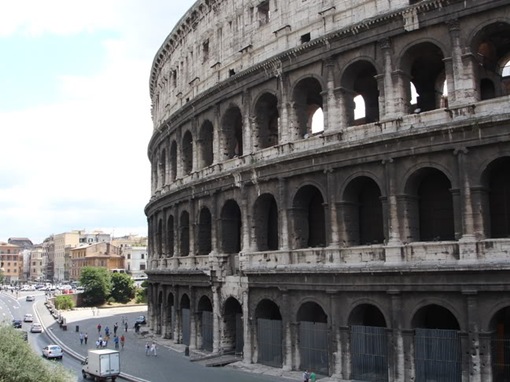 The Colosseum is elliptical, measuring 189 m (620 ft) long and 156 m (513 ft) wide. Its exterior, 47 m (157 ft) high, is a three-storied arcade surmounted by a fourth story pierced with windowlike openings. Each of the three arcaded stories originally had 80 arches. A broad pavement of travertine (a whitish calcium carbonate frequently used as building stone), bordered by travertine posts, once surrounded the entire Colosseum, which was entered through the arches of the lowest arcade. The outer wall and the skeleton of the interior up to the second story were constructed of large blocks of travertine bonded with metal. Elsewhere, softer stones, concrete, and bricks were used. 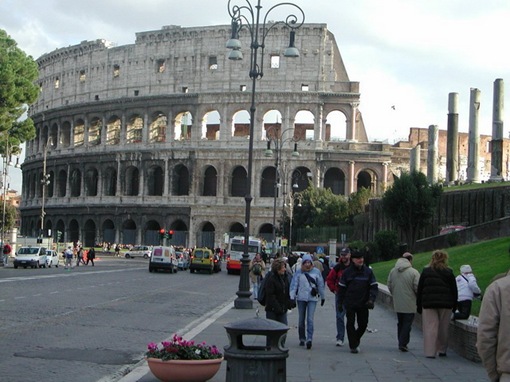 The openings of the surviving arches of the Colosseum are framed with impressive but nonfunctional engaged columns and entablatures of the Tuscan, Ionic, and Corinthian orders (see Column). The fourth story is decorated with Corinthian pilasters and entablatures. In ancient times, statues filled the spaces of the arches, and metal shields were attached to the spaces between the large windows of the fourth story. Above these windows ran a continuous row of consoles in which sockets were cut for the masts that projected upward through corresponding holes in the cornices. These masts supported awnings used to protect the spectators from the sun. 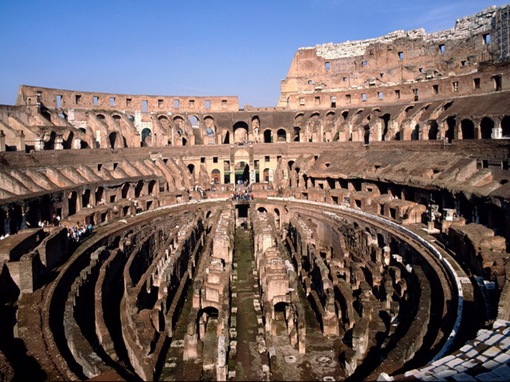 Behind each of the outer arcades, two corridors circled the Colosseum, and beyond these were two other smaller concentric corridors. From the corridors, stairways gave rapid access to all parts of the cavea, which extended upward from the podium, or platform, bordering the central arena. On the podium were marble seats for distinguished spectators, along with individual boxes provided for the emperor and the chief city officials. The cavea was behind the podium and separated from it by a low wall and a passageway. Divided by aisles into wedge-shaped sections, the cavea sloped upward to a high wall, which was pierced with windows to light the corridor behind it. Above this was a gallery of wooden seats, which was covered in the rear with a portico. The seating capacity of the Colosseum is believed by modern scholars to have been about 50,000. 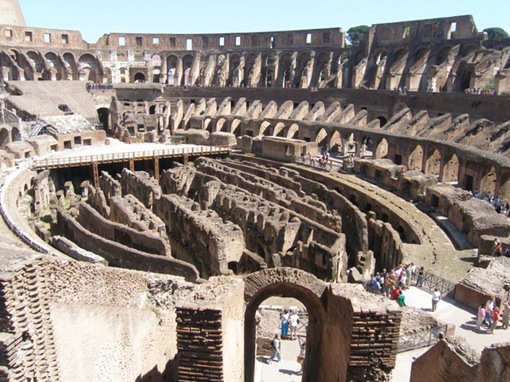 The elliptical arena inside the Colosseum, measuring 280 ft (85 m) long and 53 m (175 ft) wide, was a pit surrounded by a high wall, intended to protect spectators from the wild animals often used in combats held in the arena. Its sand-covered floor was built of wood supported by deep substructures, in which traces of animal dens, elevators, and other mechanisms have been found. Combats between gladiators in the Colosseum were abolished in ad 404, and the last recorded fight between animals was held there in ad 523. 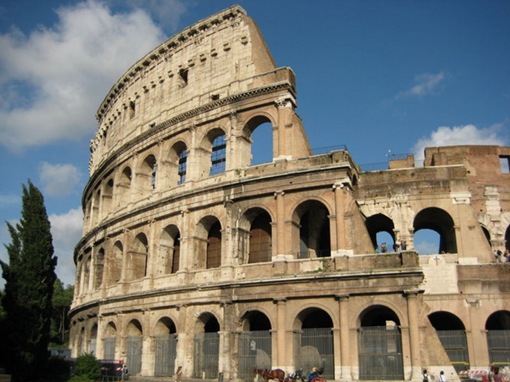 A major restoration of the crumbling Colosseum began in 1995. At that time visitors could view only about 15 percent of the arena. The restoration’s purpose was to shore up the outer walls and foundations, clean the structure, and open up about 85 percent of the Colosseum to visitors. The first performances held in the Colosseum in more than 1,500 years occurred during the year 2000, when the Greek National Theater performed three tragedies by the ancient Greek dramatist Sophocles, beginning with Oedipus Rex. The restoration was scheduled for completion in 2003 or 2004. 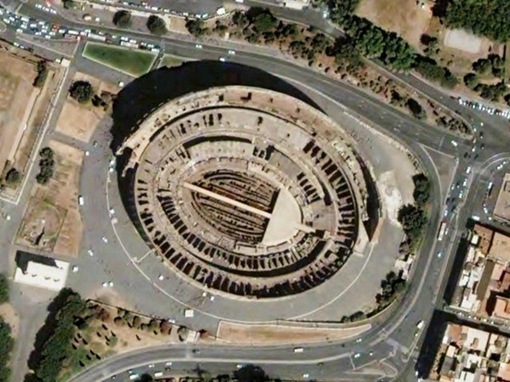