The greatest river of South America, the Amazon is also the world's largest river in water volume and the area of its drainage basin. Together with its tributaries the river drains an area of 2,722,000 square miles (7,050,000 square kilometers)—roughly one third of the continent. It empties into the Atlantic Ocean at a rate of about 58 billion gallons (220,000 cubic meters) per second.

The Amazon varies in width from 4 to 6 miles (6 to 10 kilometers); its mouth is more than 150 miles (240 kilometers) wide. The largest oceangoing steamers can ascend the river 1,000 miles to Manaus, a Brazilian inland port. 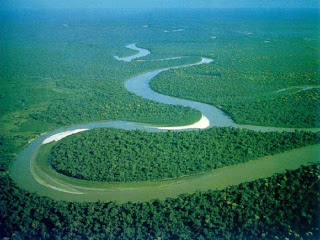 For most of its course the river flows just south of the Equator, and so the Amazonian climate is hot and humid. Annual rainfall amounts to about 50 inches (130 centimeters), while the average temperature over a year is about 85° F (30° C). Most of the Amazon Basin is a lowland forest of hardwoods and palms. The northeastern portion has extensive savannas, or grasslands, with occasional trees and shrubs.

The remarkably rich and diverse Amazon Basin plant and animal life is a resource of world importance. Of all the species of plants in the world, almost three fourths, many of which are still unidentified, live in the Amazon Basin. The Amazon has often been described as a vast sea of fresh water that supports about 1,500 to 2,000 species of fish, including catfish, electric eels, and piranhas. The basin also has an immense variety of insect, bird, reptile, and mammal life. 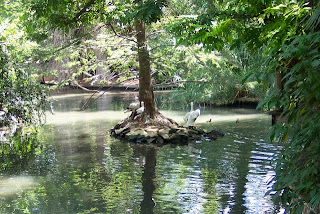 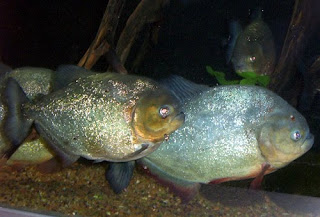 The vegetation of the Amazon jungle grows rapidly, soon covering cleared areas unless it is cut back constantly. Again and again the jungle has defeated settlement efforts. At the same time, conservationists are concerned about the overcutting of valuable plants such as hardwood trees and also the destruction of rare plant species when the jungle is burned over for clearing. The many Amazonian plants are a valuable source for development of new hybrids.

Mammals include the capybara, a rodent weighing up to 110 pounds (50 kilograms) whose flesh is eaten; the tapir, an edible kind of pig; the nutria, a tropical otter whose pelt is traded; the great anteater; and many kinds of monkeys. Markets along the river sell a variety of fish, including the pirarucu, which weighs up to 325 pounds (150 kilograms), and the giant catfish. Silver carp, neon tetras, and the flesh-eating piranhas are shipped to tropical fish stores throughout the world. The electric eel is a dangerous fish capable of discharging up to 500 volts.

The wide range of vividly colored Amazonian birds includes hummingbirds, toucans, and parrots. Among the reptiles are the anaconda, a huge snake that crushes its victims; the poisonous coral snake; and alligators. Giant butterflies are among the most spectacular of the insects.

Prior to European colonization, the Indian population in the basin was about 6,800,000. The Indians lived by hunting and fishing, gathering fruits and nuts, and planting small gardens. A typical house consisted of a frame of poles, walls woven of branches, and a roof thatched with palm leaves. For several reasons the Indian population had declined to less than one million by the early 1980s. 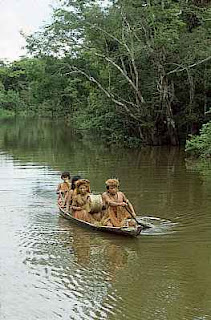 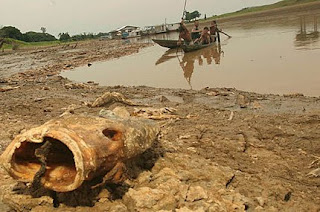 In the 17th century many Indians were enslaved and taken from Brazil. As Europeans attempted to settle the Amazon Basin and to establish mines and farms there, they killed many Indians and took their land. Also during construction of the Trans-Amazon and the Manaus-Boa Vista highways, the Brazilian government seized Indian reservation land. At that time the Indians obtained weapons, fought government troops, and either died or were displaced in great numbers. Most now live in remote reservations.

Plant products such as rubber, hardwoods, Brazil nuts, rosewood and vegetable oils, and jute and other fibers are major Amazon Basin exports. Manganese ore, diamonds, gold, and petroleum are extracted and sold. Fish are marketed locally but also are frozen and sent to other countries. 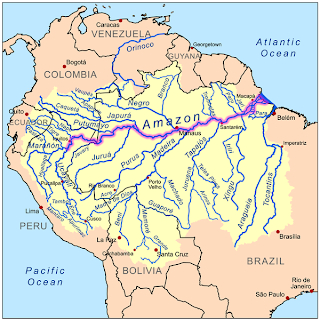 The 3,000-mile (4,800-kilometer) Trans-Amazon highway traverses the basin, linking the road system of northeastern Brazil with others of countries to the north; it continues to Brazil's border with Colombia and Peru. This highway together with connecting roads in the network has improved trade within the basin, greatly lowering transportation costs and opening up large new areas for development. All highways were designed to connect to the existing water transportation network.

The Amazon River was discovered by Francisco de Orellana, a Spanish explorer, in 1541. After descending the river from Quito, Ecuador, to the Atlantic, Orellana claimed to have seen women tribal warriors, and he named the river Amazonas for the women warriors of Greek mythology. In 1637 Pedro Teixeira, a Portuguese explorer, ascended the Amazon with 2,000 men in 47 canoes. 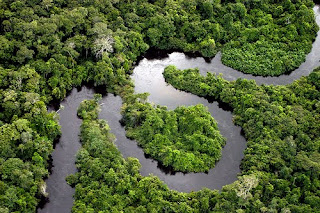 About 1751 Charles Marie de la Condamine, a French scientist, made the first geographical survey of the basin and brought the deadly Indian arrow poison curare to Europe. At the beginning of the 19th century the German explorer Alexander von Humboldt and the French botanist Aimé Bompland mapped portions of the area. 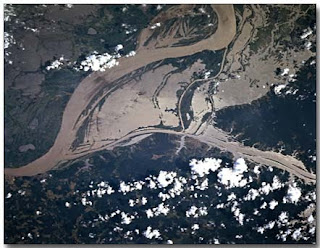 In the 1980s the Amazon Basin was undergoing one of its many periods of rapid economic development. There have been several such booms in the past. In most cases the jungle and the climate defeated all but the hardiest settlers. However, stubborn ingenuity and modern technology seem to have made permanent large-scale settlement of the region possible. (See also Brazil; South America.)