15 of the World’s Strangest Animals

They may not win any beauty contests anytime soon, but the weird wonders of the animal world are infinitely more interesting than any mundane and adorable little creature. The Earth is full of rare and bizarre fish, amphibians, mammals and more that shock us with gigantic teeth, creepy gelatinous skin, retractable claws and parasitic mating habits. From the dark depths of the sea to the treetops of Madagascar, these 15 strange animals are quite a sight to behold. 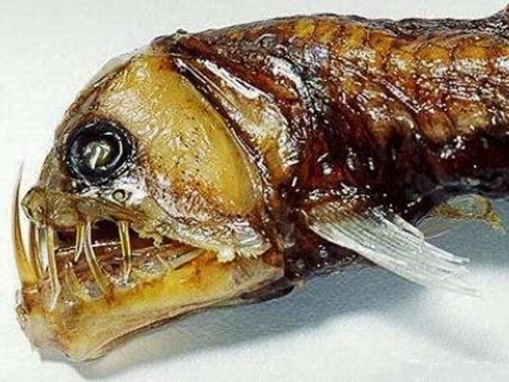 The depths of the ocean are literally swimming with creatures straight out of your weirdest nightmares, and the Viper Fish is among the scariest. This grotesque-looking creature has teeth so large, they don’t fit in its mouth. It swims at high speed toward its victims and impales them upon its sharp teeth 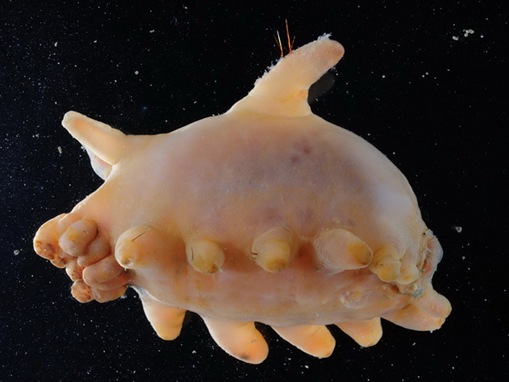 With its pallid pink flesh, the scotoplane – known as a sea pig – resembles some kind of tumorous growth that was just excised from somebody’s abdomen. But, this strange creature is actually a type of sea cucumber. Sea pigs look and act sort of like slugs, feeding on organic materials that settle on the ocean floor. 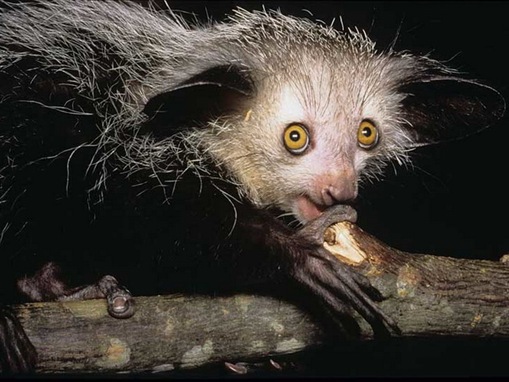 Few mammals are as weird looking as the endangered Aye-Aye, a lemur found only on the island of Madagascar, but – surprise! It’s actually a close relative of humans. With big protruding eyes, super-skinny fingers and a huge bushy tail, Aye-Ayes are pretty unique. Their bat-like ears allow them to detect insect larvae squirming inside trees, and they’ve also got a sweet tooth for coconut and sugar cane, which gets them in trouble with farmers. 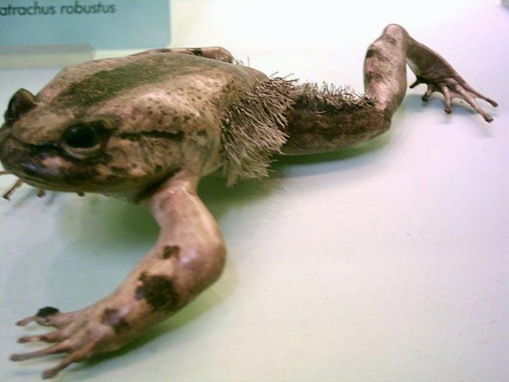 It’s called a ‘horror frog’, but this amphibian isn’t the star of a b-movie. It’s so named because of its ability to actively break its own bones to produce claws. Hairy and bizarre, the horror frog – also nicknamed the wolverine frog, after the comic book character – can break its bones so that they puncture its toe pads, producing extendable claws on demand when threatened. This Cameroon native, which is often roasted and eaten, was discovered in 2008. 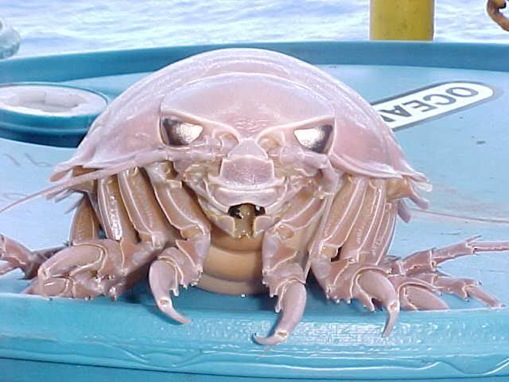 If you’re afraid of bugs, you’re really not going to like the Giant Isopod. It resembles nothing so much as a cockroach the size of a guinea pig, but it’s actually a crustacean related to shrimp and crabs. These scavengers roam the cold, dark sea floor from 560ft to 7,000ft below the surface of the ocean, eating mostly dead whales, fish, and squid. 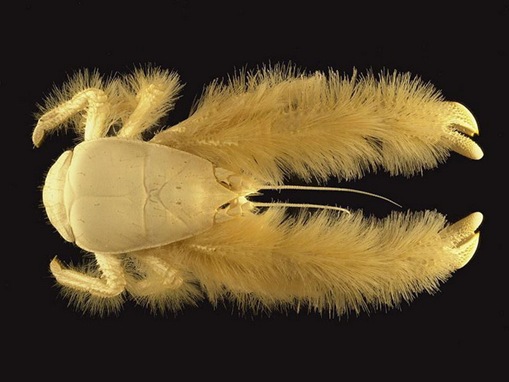 With its long, furry appendages, the newly-discovered Yeti Crab looks like some kind of sea sloth. It was discovered on the floor of the Pacific Ocean during a deep-sea diving expedition in 2006 and is so unusual that a new taxonomic family had to be invented for it. The Yeti Crab is blind and white, with fur that supports colonies of bacteria. It lives near hydrothermal vents 7,540 feet under the surface. 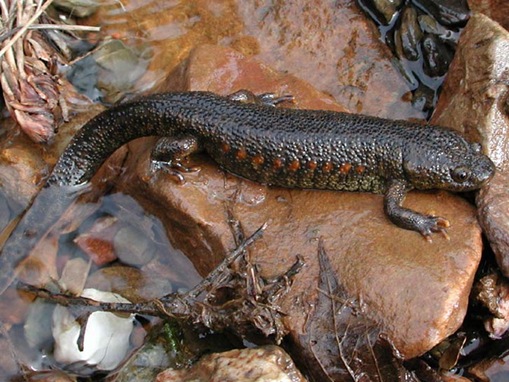 Another creature that intentionally injures itself to produce weapons is the Spanish Ribbed Newt. It looks pretty unremarkable until it’s threatened, and then it does something pretty wild: it punctures its skin with its own sharp rib bones to create spines, which are coated with toxic skin secretions. These poison spears do not emerge from permanent openings; they must rip holes in the skin each time they’re deployed. 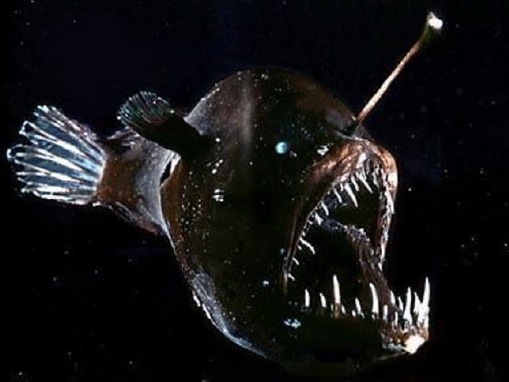 The anglerfish’s appearance is scary enough, but its mating habits truly set it apart as among the weirdest of the weird sea creatures. The male anglerfish bites into a female’s skin, releases an enzyme that digests the skin of his mouth and her body to fuse them together, and then atrophies into nothing but a pair of gonads, becoming a parasitic sperm factory. 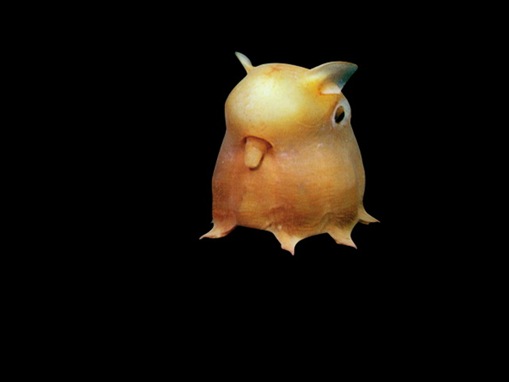 Strange as the Dumbo Octopus may be, some people actually think it’s pretty cute – hence the Disney-inspired name, given for its two fins which resemble ears. ‘Dumbo’ can be found in the dark depths of any ocean on Earth and grows up to 20cm in length. It swallows its prey, made up of mostly worms and crustaceans, whole. 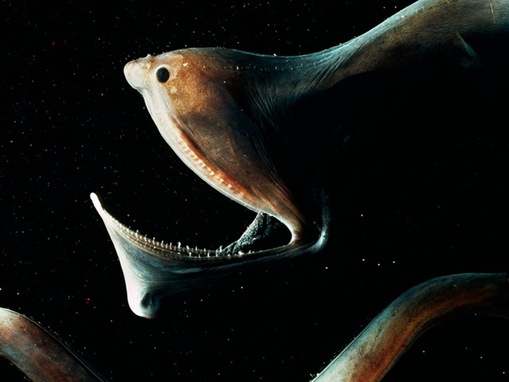 Where the gulper eel lives – way down at the bottom of the ocean – there isn’t exactly a buffet of meal choices. Luckily, this creepy creature has a gigantic jaw that allows it to eat pretty much anything it comes across, regardless of size. At the end of its very long, whip-like tail, there’s a light-producing organ called a photophore that it uses as a fishing lure to attract prey. 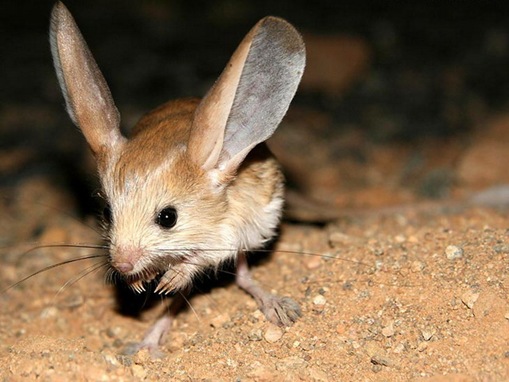 Shaped somewhat like a tiny kangaroo, the nocturnal mouse-like Long-eared Jerboa uses its elongated tail and hind legs for jumping. The endangered rodent, found in the Gobi desert of Mongolia, has ears that are about a third larger than its head and eats mostly insects. It’s so extraordinary that it’s the only species of its genus. 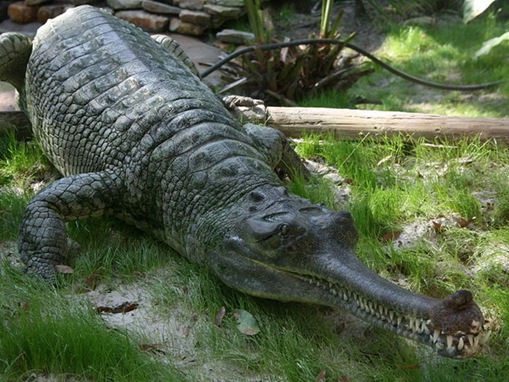 Most of us have grown accustomed to the prehistoric appearance of alligators and crocodiles, but for those unused to looking at it, the Indian gharial seems like something transported straight from the age of dinosaurs. This severely threatened native of Indian rivers has a very long, thin snout fitted with a row of sharp teeth. Scientists suspect that heavy metal pollution in the rivers is causing debilitating gout and making gharials susceptible to infection. 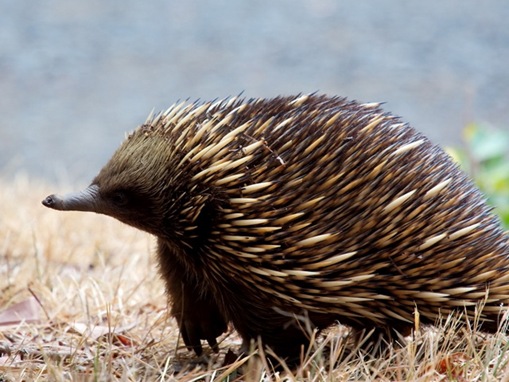 Is it a porcupine or an anteater? Neither, actually. The long-beaked echidna is a rare egg-laying mammal found in Papua New Guinea. This nocturnal critter is a relative of the platypus, but lives underground where it uses its tube-like snout to search for invertebrate prey like insect larvae and worms. It has to eat soft foods, because it doesn’t have any teeth. Hatchlings are known as ‘puggles’, and they reside in a sticky pouch to receive milk from mammary patches on the mother’s body. 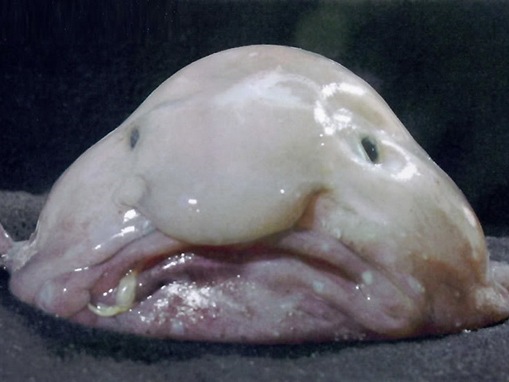 When you pull up your fishing net to inspect its contents, the last thing you want to see is a gelatinous mass of pale flesh peering up at you with dull bluish eyes. But, fear not – catching a blobfish is extremely rare. These bizarre fish live in the depths off the coasts of Tasmania and Australia. They don’t have any muscles, but since have a lower density than the water, so they just sort of float around. Its wrinkled pink skin, piggish nose and protruding teeth don’t exactly make the naked mole rat the cutest animal around. Colonies of these hairless rodents live in underground “palaces” led by one dominant rat – the queen, which is the only female to breed and bear young. As with bees, naked mole rats have roles in the colony, including workers that dig the tunnels and gather food. Most naked mole rats are found in the sandy deserts of sub-Saharan Africa.